There's a weird sort of hive mind in the world of publishing and today's post is evidence. Three great books about gymnastics are having their book birthdays today. So if you are a reader who dreams about round-off back handsprings or if you regularly land on a balance beam that is four inches wide today is your day too. 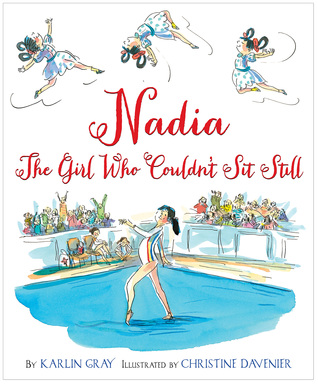 
Nadia Comaneci was a feisty and fearless little girl who went from climbing trees in the forests of Romania to swinging into history at the 1976 Olympic Games, where she received an unprecedented seven perfect scores in gymnastics. But as readers will see in this first-ever illustrated picture book about Nadia’s journey to Olympic gold, the road from small-town girl to world-class athlete was full of many imperfect moments. Expert illustrations that capture the energy and fluidity of Nadia's exuberant gymnastic routines and referential back matter round out this inspirational story of determination and overcoming adversity. A perfect 10.

Grace lives and breathes gymnastics—but no matter how hard she pushes herself, she can never be perfect enough.


Leigh, Grace’s best friend, has it all: a gymnastics career, a normal high-school life…and a secret that could ruin everything.
Camille wants to please her mom, wants to please her boyfriend, and most of all, wants to walk away.
Wilhelmina was denied her Olympic dream four years ago, and she won’t let anything stop her again. No matter what.
Monica is terrified. Nobody believes in her—and why should they?
By the end of the two days of the U.S. Olympic Gymnastics Trials, some of these girls will be stars. Some will be going home with nothing. And all will have their lives changed forever.


Happy #bookbirthday to Shawn Johnson and A.L. Sonnichsen authors of THE FLIP SIDE (Simon & Schuster Books for Young Readers).

From gold medalist and reality TV star Shawn Johnson comes a debut YA novel inspired by her own experiences as an elite teenage gymnast—just in time for the Summer 2016 Olympic games.


Charlie Ryland has a secret.
She may seem like your average high school sophomore—but she’s just really good at pretending.
Because outside of school Charlie spends all her waking hours training to become one of the best gymnasts in the world. And it’s not easy flying under the radar when you’re aiming for Olympic gold…especially when an irresistible guy comes along and threatens to throw your whole world off balance.
Inspired by her own experiences as a fifteen-year-old Olympic gymnast, gold medalist Shawn Johnson writes a delightfully entertaining novel about chasing big dreams and falling in love, all while trying to keep it real.

As we journey on the Road to Rio this year, I predict that you'll see a lot more books with female athletes. Let's hope that publishers go beyond the well-known sports of soccer, swimming, and gymnastics. I'd love to see a rowing book (ahem, wish it were mine), fencing, or canoeing (see other little known Olympic sports here.)