Celebrate 2019 International Day of the Girl with SERENA: THE LITTLEST SISTER 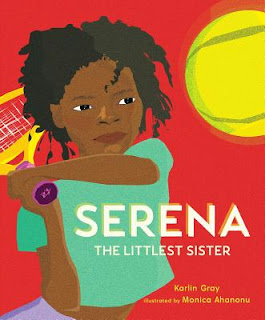 "We need to uphold the equal rights, voices, and influence of girls in our families, communities, and nations. Girls can be powerful agents of change, and nothing should keep them from participating fully in all areas of life." — UN Secretary-General António Guterres

It's fitting that today as we celebrate the October 11 InternationalDay of the Girl, we feature this engaging book that celebrates Serena Williams, an inspirational and powerful agent of change.

In this picture-book biography, Karlin Gray (author of NADIA: The Girl Who Couldn’t Sit Still) introduces readers to a younger Serena, the littlest Williams sister. She went on to become ranked number one in the world in tennis, hold the most Grand Slam titles, and add four time Olympic gold medalist, UNICEF International Goodwill Ambassador, plus fashion and interior designer to the list of achievements.

Gray addresses the question: How does having a sibling affect athletic interest or performance? Just ask anyone with a sibling who plays a sport and the answer might be, “I didn’t want to be compared to my brother/sister so I joined (fill in the blank) team” or “I was bored watching my sister play from the sidelines so I joined along.” Serena was just four-years-old when she followed her four older sisters Venus, Lyndrea, Isha, and Yetunde onto the public tennis courts in Compton, California. She was part of a team, a family who dedicated themselves to one sport: tennis.

While many may be familiar with the sisterly, competitive bond of Serena and Venus, Gray shares the different interests of all the sisters and how each influenced their little sister on and off the court. I highly recommend this sporty girl book, SERENA: THE LITTLEST SISTER, that is beautifully illustrated by Monica Ahanonu, an artist who “loves creating art that features bright colors and strong black women.”

The back matter includes a follow-up to what each sister is currently doing with quotes from each and a bibliography (books, periodicals, film/TV, and Websites).
Posted by Brenda Barrera at 11:09 AM No comments: