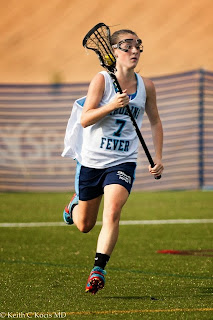 Erin Kenedy, of Cary, NC, started playing lacrosse in sixth grade. She's been playing competitively ever since and currently plays for the competitive club team, Carolina Fever, as  a defender/middie. She was nice enough to do this interview over texting during her Showcase Florida Tournament. Erin is planning to play in college and has the impressive record to get her there.

Thanks for being on the blog, Erin. Could you tell us a bit more about yourself?

I'm 16 year old, I love to hang out with friends and shop. My favorite class subject is math and I enjoy food (haha).

How did you get into lacrosse?

I started playing in 6th grade because my older sisters played and wanted me to get into the sport. Although I didn't get serious in the sport until the beginning of high school.

I know you run cross country and that your mom is a serious runner and qualified for the Boston Marathon. Could you see yourself doing that?

No. I only do cross-country to stay in shape. (haha) I don't see myself running a marathon for multiple reasons including the fact that I don't enjoy running long distances that much.

What are you favorite practices and why?

I like our practices generally when we scrimmage. I feel like it brings out a great competitive side out of everyone and you feel like it's game time. Depending on the team I'm on, I'm generally a leader although when I am on higher teams I sometimes follow.

What is your favorite book? And do you read sporty girl books?

My favorite book is the Hunger Games Series. I haven't seen Catching Fire yet, but I'm dying to.
I don't really read sporty books, as I tend to read action books. The last book I read was The Boy Who Harnessed the Wind.

I haven't read that yet, but have heard great things about it. Good luck this season and thanks again for being a part of Sporty Girl Books!
Posted by Robin at 4:00 AM No comments:

"Black girls can be ballerinas:" The inspiring Misty Copeland & Debbie Allen's Dancing in the Wings

If you haven’t heard of ballerina Misty Copeland, you haven’t been paying attention. Ms. Copeland has been featured on ABC and NBC news programs, in niche magazines Dance and Pointe, Essence and Ebony, has toured with the artist Prince, and was recently award the Young, Gifted, and Black Award during the Black Girls Rock Award show. 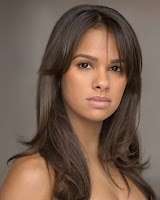 As she mentions in the speech, Ms. Copeland was one of six children. Her single mom worked full time. She was discovered at age 13 on the basketball court of the Boys and Girls Club and began taking free dance lessons. If you’ve seen tiny girls in tutus, you probably know that 13 is considered a “late start” for someone interested in classical ballet training. That didn’t deter Ms. Copeland.

When she won the Los Angeles Music Center Spotlight Award, it led to a position in the San Francisco Ballet’s summer intensive program. Next came the summer intensive at American Ballet Theater and then a place in the ABT’s corps de ballet. Promotions followed and in 2007, Ms. Copeland became the first African-American female in twenty years to solo for the American Ballet Theater. Most recently, Ms. Copeland was featured as the Firebird in Igor Stravinsky’s, The Firebird. She aspires to solo in classical ballets.

In a variety of interviews she talks about how she doesn’t fit the typical image that many people have of ballerinas. She says that it is difficult to be a person who stands out in an art form where you want to blend in and be part of a group (the corps). “[I’m] a curvy woman in this field. Being black and having started late.” One of the difficult pieces of the puzzle for Ms. Copeland was the lack of African-American mentors in the ballet world. “I went through times when I felt like didn’t belong. Not really because I was being told I didn’t. But I just didn’t feel like I looked like anyone around me.” (NBC interview)

Even though Ms. Copeland couldn’t find the people who looked like her in classical ballet or even in books, she did find mentors to help her along the way. She cites strong black women in general and specifically Raven Wilkinson who fought discrimination in the 1950’s to dance for Ballet Russe as one of the first black ballerinas.

Now, Ms. Copeland is a mentor to many other young ballerinas of color to whom she says, “Black girls can be ballerinas.” Ms. Copeland has two books in the works. One is a memoir, Life in Motion: An unlikely ballerina. The other is a book for children coming out in 2014 (G.P. Putnam Books for Young Readers) with illustrations from Christopher Myers. (If I can get one, I’ll review it for you here!)

Until then, I’ll remind you of a wonderful retro-read by Debbie Allen. Yes, if you are the same vintage (age) as I am, you remember Debbie Allen as the stick pounding dance master on the TV show Fame.

Her book Dancing in the Wings, illustrated by Kadir Nelson, pubbed in 2000 is still relevant today. I have an affinity for the main character Sassy who, like me, is tall with big feet. She is afraid that because her body type doesn’t match those of the other dancers, she will not be recognized for her talents. With some wise advice from her Uncle Redd, and a few missteps during an audition, she finds her path and a place in the summer dance festival in Washington, DC. The story is the classic ugly duckling turns swan but Sassy’s big personality (like her feet), the way she stands up to her brother’s nonsense, and the amazing illustrations by Kadir Nelson make this a great read.

Posted by annawritedraw at 2:56 PM 2 comments:


Since 1997, the organization has impacted 7.5 million kids, and has active programs in all 50 states and internationally.

For more information, here’s a link to the website: THE FIRST TEE

I seriously love the core curriculum; teaching kids to respect themselves and others by learning rules of the game, dressing appropriately for the sport, being a good sport whether you win or lose, and being honest about their scores. In a lot of ways, the core values reminds me of the Girl Scout Law and Promise.
Posted by Kristine Asselin at 9:00 AM 2 comments:

We have been using our twitter account @sportygirlbooks to publicize current news about girls in sports. Here are some of our favorite articles that you might have missed:

Local skateboarder 'a girl in a guy's territory'

- Some of the other skateboarders talk about Hailey Seitz behind her back. "They say she sucks," said 10-year-old Santiago Samanamud after school one afternoon at the local skate park. They...
View on web

The battle for equal opportunity in sports is far from won. In fact, the situation is getting worse, not better. Consider this sobering statistic: Since 2004, the gap in the number of sports partic...
View on web

If we want more women in sport we must raise their profile | Natasha...

Natasha Henry: Girls are shying away from physical activity, partly because the media ignore our female athletes

Opening Doors of Opportunity for Women and Girls Through Sports

These women may have come from all corners of the globe and speak different languages, but one trait unifies them: They all want to create more opportunities for women and girls through sports.
View on web

The number of concussions suffered by young athletes is on the rise, with an increase among girls as they become more competitive on the sports field.
View on web