I’m thinking ahead to June 23, which is not only Olympic Day but also the 45th anniversary of the passage of Title IX. This groundbreaking legislation was signed into law as part of the Higher Education Act by then President Nixon. Its impact has been far-reaching and positive for girls in our country by prohibiting discrimination and ensuring fair and equal access and opportunity:

“No person in the United States shall, on the basis of sex, be excluded from participation in, be denied the benefits of, or be subjected to discrimination under any educational program or activity receiving Federal financial assistance.”

It’s important to note this Civil Rights legislation is not only for sports but all federally funded educational opportunities. A statistic that demonstrates it’s impact on girls sports: before 1972 only one in 27 girls played high school sports and today that number has increased to two in five.  With that said, there’s still work to be done as noted per the video link at the end of this post from Olympic soccer star, Julie Foudy.

While there are several websites and go-to resources, my recommendation for anyone wanted a primer to understand this gender equity issue is to begin with The Women’s Sports Foundation on Title IX (primer, myths and facts). Also, Nancy Hogshead-Maker (attorney, three-time Olympic Gold medalist in swimming) founded the nonprofit organization, ChampionWomen: Advocacy for Girls & Women in Sports, which serves as another resource.

Here are a few books about Title IX. Unfortunately, a quick check of copyright and it’s clear several are outdated, but they offer a historical overview of this landmark legislation.

Encyclopedia of Title IX and Sports by Nicole Mitchell (2007)
Goodreads

Getting in the Game: Title IX and the Women's Sports Revolution by Deborah Brake (2010)
Good Reads

Let Me Play: The Story of Title IX: The Law That Changed the Future of Girls in America by Karen Blumenthal (2005)
Check out: Sporty Girl Books post from September 13, 2016

A Place on the Team: the Triumph and Tragedy of Title IX by Welch Suggs (2005)
Goodreads

Video:  The next steps for Title IX per Julie Foudy from Positive Coaching Alliance.

Posted by Brenda Barrera at 11:57 AM No comments: 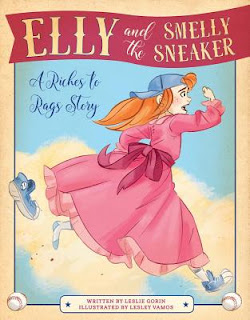 Today I am excited to review a new fractured Cinderella tale, Elly and the Smelly Sneaker.

Elly has everything a girl could desire: bonbons, pretty clothes, maids to put everything in order, and a family that treats her like a princess. Except that, to her, life's a boring, royal pain. All Elly really wants is to be with other kids--especially when they play baseball. She dreams of opening days, double plays, and joining the team. Then, one day, her fairy godfather arrives to make her wish come true. Will Elly FINALLY succeed in trading her glass slippers for a pair of smelly sneakers?

I love this book! First, it's nice to see a Cinderella character that isn't being mistreated for a change. Elly's family is kind and caring and wants to give her everything money can buy. But all Elly wants is to be out with the other kids playing baseball. How can you not adore a Cinderella like that? The illustrations in the book are fun and add to the action. This book is perfect for any teacher looking to add a fractured fairy tale to a classroom library. It will also be enjoyed by kids (and adults) of all ages who want to see Cinderella ditch the glass slipper for something more practical and fun.