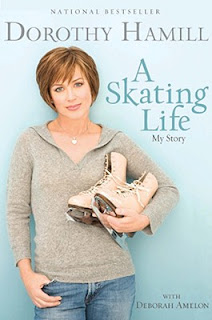 Before the United States figure skating world had female national champions named Bradie, Ashley, Sasha, Michelle, Tara, Nancy, Kristi, Tonya, Debi, Rosalynn, and Linda . . . there was Dorothy. I found myself thinking about Dorothy Hamill this past month while watching the PyeongChang Winter Olympics. I was 11-years old in 1974 when she won her first U.S. National Championship title which was followed two years later with an Olympic gold medal at the 1976 Winter Olympic Games in Innsbruck, Austria. Like hundreds of young girls, I wanted to have a wedge haircut like hers that would swing around my face when I was gliding across the ice. Unfortunately, since I only skated outside in the cold I had to wear a wool hat and, with my long curly hair, there was no chance of replicating her short and sassy do.

I picked up a copy of her memoir, A SKATING LIFE: MY STORY (published in 2007) and it was a revelation to learn about the challenging relationships (family, competition, work-related, and love life) that she navigated. Hamill opens with a Prologue from 1976 where she is on the podium in Innsbruck and unable to find her Mom in the stands. She did not go to watch her daughter compete. At the hotel afterward, her mother asks how she did and after Dorothy tells her she won her reply is, “That’s nice, Dorothy.” Thus, this sets the stage for a heart wrenching account of a complicated mother/daughter relationship.

Hamill shares the numerous sacrifices her parents made to help her achieve her dreams, the multiple coaches and figure skating professionals she worked with over the years, and the difficulties of juggling a professional skating career while maintaining her personal relationships. The heartbreaking pain of her two divorces are told with raw honesty. But there is a shining light throughout, her daughter Alexandra. Eventually, with time, maturity, and therapy she grows to understand the complicated circumstances of her life and at the end of the book, comes full circle to find peace with her mother.

This book may be a few years old, but it’s relevant and sure to tug at the hearts of figure skating fans and athletes grappling with a complicated parental relationship. This serves as a reminder that the beauty we see in athletic performances (often lasting only a few minutes) can be a culmination of many years filled with hard falls, financial sacrifice, insecurities, stage fright, and painful personal challenges. Dorothy Hamill’s life on and off the ice is a poignant story of an important figure in American sports history whose personal journey of determination and perseverance is one to be admired.

NOTEWORTHY:
The 2018 PyeongChang Paralympic Winter Games are coming up from March 9-18 and they don’t have Figure Skating but they do have Alpine Skiing, Biathlon, Cross-Country Skiing, Curling, Sled Hockey and Snowboard.
For information: www.paralympic.org

Dorothy Hamill founded an adaptive ice-skating program at the Kennedy Krieger Institute in Baltimore, MD, so that children with physical disabilities could enjoy recreational ice skating. For information: http://i-skate.kennedykrieger.org
Posted by Brenda Barrera at 6:17 PM No comments: