Baseball stories, especially middle grade ones, bring me back to learning to play baseball by my amazing mom who pitched on an all-boys team growing up. She was tough and amazing and I strive daily to be like her. 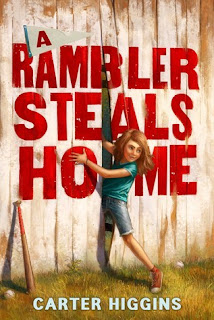 Yesterday I read A Rambler Steals Home by Carter Higgins (out Feb 2017). Everything about this story took me to the ballpark, and most especially, took me into the main character Derby's heart. As a rambler, moving in town to town depending on the season, I yearned for her to have a home, to have a place not on wheels. This is a well-crafted story with the wonderful little details that truly bring a story to life. All the characters were as big as life (and their names are fabulous. The only typical name is Peter the turtle!). I would have loved to be there for Rally Day, to splash in the creek, to make friends of my enemies, to race a turtle, to watch the sweetness of the 5th inning grounds run, and to taste those sweet potato fries.

Congratulations to Carter on a wonderful debut. I'm looking forward to more amazing stories from you. I'm on the hunt for a 2017 penny to make my wish.

From Goodreads: Eleven-year-old Derby Christmas Clark is a rambler of the road. She travels year-round in an RV with her father and younger brother, selling Christmas trees during the cold months and burgers and fries during baseball season. Derby always did prefer grease splatters to hauling trees, so she’s excited that summer will take her back to small town Ridge Creek, the Rockskippers, her best friend, and her surrogate mom, June. But this summer, a tragedy has changed Ridge Creek—and as Derby tries to help those she loves, long-held secrets are revealed. This warm-hearted southern debut is perfect for fans of Kate DiCamillo and Sheila Turnage.

I also wanted to give a shoutout to our wonderful Stacy Mozer! Today is the release of The Perfect Trip! It's the second in her Sweet Spot series about baseball. Congrats Stacy!
Posted by Robin at 11:06 AM No comments: 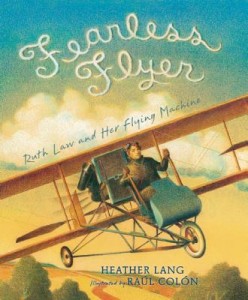 I just logged onto the Williamsburg Public Library to reserve a copy of the new memoir, SHOOT LIKE A GIRL by Maj. Mary Jennings Hegar, a recipient of the Purple Heart and the Distinguished Flying Cross with Valor Device who served three tours in Afghanistan flying Combat Search and Rescue plus Medevac missions. I couldn’t help but think about how far female pilots have come since the turn of the 19th century and era of aviation pioneers like Amelia Earhart, Bessie Coleman, and Ruth Law.

Most readers are familiar with Earhart’s accomplishments like flying solo across the Atlantic Ocean. Having lived in Chicago for many years, I was well aware of Coleman who was the first African American female pilot and is honored at O’Hare Airport. I was not familiar with Law, however, until I read about her gutsy flight from Chicago to New York in Heather Lang’s well-researched picture book biography, FEARLESS FLYER.

Is aviation a sport?  Well, some might argue not, but at the turn of the 19th century, a variety of air sports events were held throughout the country.  Who was Ruth Law? She was a trailblazing aviation pioneer (1887-1970) who performed daredevil tricks like spiral dives and challenged stereotypes by participating in acrobatic and altitude competitions. She bought her first airplane in 1912 from none other than Orville Wright and refused to let society's barriers hold her back from her ambitions.

FEARLESS FLYER highlights her most noteworthy accomplishment of a nonstop flight record of flying a biplane from Chicago to Hornell, New York. It was a blustery day on November 19, 1916, when she took off from Chicago’s Grant Park for this one day trip that was met with several unexpected challenges. One of my favorite illustrations in the book by acclaimed artist Raúl Colón is when she circled her plane around the Statue of Liberty. I learned that she wanted to use her skills as a pilot to fight for her country during World War I but the U.S. government did not allow women in combat roles and a bill was even introduced to allow this but was rejected.

This historically significant book is inspirational and includes photographs and additional biographical notes, plus several quotes like this one at the end that I jotted down in my journal:

Posted by Brenda Barrera at 4:56 PM No comments: