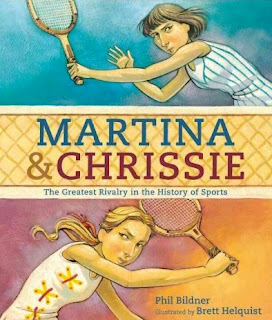 A few weeks ago I enjoyed watching “Battle of the Sexes” about the infamous 1973 matchup between tennis greats Billy Jean King and Bobby Riggs. And this past weekend I got a text that my brother Paul (who has been playing competitive tennis since the 1970s) won the USTA 55 + older (8.0) National Championships! Needless to say, I have had tennis on the brain and was excited to read MARTINA & CHRISSIE: THE GREATEST RIVALRY IN THEHISTORY OF SPORTS by Phil Bildner.

This picture book introduces readers to two vastly different tennis players, Martina Navratilova and Chris Evert, who both discovered their sport at a young age and skyrocketed to national champion titles as teenagers. They spent years as adversaries competing against each other 80 times, yet they forged a friendship that has endured to this day. Bildner covers their different backgrounds (United States/Czechoslovakia), playing styles (baseline/serve-and-volley), and personalities (controlled/emotional). Brett Helquist’s artwork is delightful, especially the spreads of iconic matches like the French Open highlighting their dramatic back and forth leads and even Martina getting nailed in the head by a shot from Chrissie at Wimbledon.

I found the tone, however, a bit confusing and wondered who was the intended audience. The pre-introductory page begins, “Hey, guys—yeah, I’m talking to you...” and further along “Guys, Martina OWNED the net” and “But guys, numbers NEVER tell the whole story.” It reads like a continuation of a dispute with someone (e.g., the guys) about why Martina and Chrissie are the greatest rivalry in the history of sports. Thus, notably missing is any content to support the subtitle—what about Borg vs. McEnroe, Williams vs. Williams, or Seles vs. Graff? And what about other sports other than tennis?

Nevertheless, MARTINA & CHRISSIE is a welcome addition to sporty girl biography collection for anyone interested in learning about these tennis icons, and I’m sure it will motivate some readers to pick up a racket and head to their neighborhood tennis courts. The supporting back matter includes a helpful timeline and source list.

Posted by Brenda Barrera at 12:37 PM No comments: