Ice-Skating Lessons: Dream Big, Get Back Up When You Fall, Celebrate Life 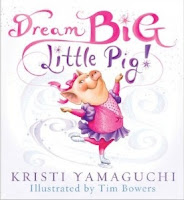 Flipping through TV channels this past weekend I caught some of the Progressive Skate America, a good preview of the 2017 U.S. Nationals coming up on January 14-22 in Kansas City. Then yesterday, I came across this video interview with Olympic gold medalist and beloved figure skating commentator, Scott Hamilton, who is now battling his third brain tumor.  As a longtime fan, my heart sank.  His courage and matter-of-fact demeanor are not surprising to anyone who has followed his career.

In the interview, he references fellow Olympic gold medalist Kristi Yamaguchi, and they show a clip from the 1991 U. S. Figure Skating Championships where she took a hard fall at the beginning of her program and immediately got up, continued her routine, and finished with a joyful smile. Hamilton noted the life lesson which he shares with beginner ice-skaters: you will fall and make mistakes, but the more times you get up, the stronger you will be for each future obstacle.

Since retiring from the sport, Yamaguchi has added children’s book writer to her impressive resume, beginning with her delightful picture book, DREAM BIG LITTLE PIG about Poppy the Pig who discovers not every activity (ballet, singing) is going to be her calling yet she follows her bliss and pursues ice-skating, which leads to mastering jumps and spins. She attracts a huge fan club and even makes the cover of the “New Pork Times.”

Life obstacles may sideline us, and we may stumble while attempting to twirl through unforeseen circumstances, but as Hamilton shares, it’s how many times you get up that makes you stronger. He chooses to celebrate life. Yamaguchi’s Poppy reminds us to dream big, never to give up, listen to your personal fans (family and friends who believe in you) and keep pursuing your passions.
Posted by Brenda Barrera at 4:37 PM No comments: 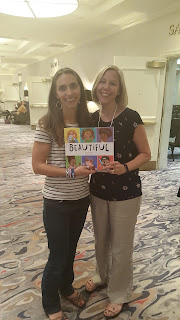 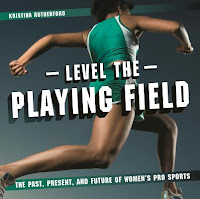 I am always looking for interesting nonfiction for my third grade classroom so I was very excited to see this new book for kids about the past, present, and future of women's pro sports.

Here's the blurb from IndieBound:

The experience of being a professional athlete is very different for men and women. While men's pro sports command throngs of fans, media attention, and money, many of the world's top professional female athletes aren t valued or recognized equally for their talent even though female athletes prove time and time again that they have all the skill, drama, and rivalries of their male counterparts.
Level the Playing Field examines the root of these issues by taking readers through the history of women's pro sports, exploring how far we have come in a relatively short time and exposing what ground is left to gain. The book provides first-person insight through exciting interviews with professional female athletes, including Canadian hockey player Cassie Campbell, American MMA fighter Miesha Tate, and WNBA star Elena Delle Donne. Along the way, author and sports journalist Kristina Rutherford covers important topics like opportunity, female role models, and stereotypes. Drawing on examples from a wide range of sports, and complete with sidebars, photographs, sources, and an index, this is an informative and authoritative book that makes an important contribution to the movement for women's acceptance in professional sport.

I enjoyed many things about this book. It had a clear and concise way of explaining the history and current experience of women in sports. The layout was easy to follow and there was a good mix of sports (even though I would have loved to see more baseball). Throughout the book were interviews with sports stars, which give a first hand look at the experience. Last, I liked that even when discussing the difficulties and inequities, the book still has a very positive outlook and makes sure to detail all the strides that have been made. Overall, I think this book is a perfect addition to any classroom or school library.
Posted by S. Mozer at 7:30 AM No comments: