I've recently discovered Brene Brown by her Ted Talk on Shame, and went to the library and checked out 3 of her books. I've read The Gifts of Imperfection. I'm reading Daring Greatly right now. Women (and men) of all ages could learn and grow from learning to let go of Perfection, a world that doesn't exist, and becoming someone who accepts imperfection and can find joy.

She has many Ted talks and youtube videos, but here's a short one to give you a taste of Brene. I hope you'll give her a chance. I'm learning to be more authentic, and I am accepting myself more.
I am enough. And so are you. No matter what you've accomplished today.

Lucille Mulhall, Governor, the Congress of Rough Riders, and an Inauguration 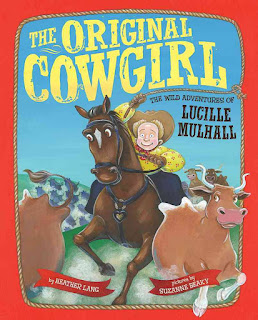 I’ve been thinking about our upcoming change in government and this weekend’s Women’s March on Washington and cities across the country with thousands gathering to shine a light on women’s rights/human rights. Growing up I don’t recall learning about the suffragist movement, and I was a tad too young to remember the ERA and NOW marches of the 70s. But these past few years, as I have been reading about and learning about so many sporty girls not on my radar, I’m continually amazed to learn about trailblazers who have paved the way for girls and women to have the opportunities available today; some of these women are well-known and others deserve more recognition.

A big lasso of thanks goes to Heather Lang, author of the picture book THE ORIGINAL COWGIRL about a trailblazing cowgirl -- and no, it was not Annie Oakley. This fearless young Oklahoman, Lucille Mulhall, has the title of our country’s first cowgirl. She defied traditional activities like cooking and sewing, opting instead to train horses and herd cattle. It turns out this teenager had natural talent and drive for roping cattle. Fortunately, her father Colonel Mulhall recognized that quality and upon her return from boarding school, presented her with a sixteen hand chestnut horse named Governor. She also performed roping tricks for Teddy Roosevelt with the Congress of Rough Riders and Ropers.

Now here’s a fascinating story this is covered in this book and also the Oklahoma Historical Society, Teddy Roosevelt met her and “legend has it he told her if she could rope a wolf, he would invite her to his inaugural parade. She came back three hours later dragging a dead wolf behind her.”

And I found this blog reference by noted cowboy author Jim Olson: “Legend has it that during the visit, Roosevelt went riding with Lucille and they spotted a grey wolf. This whetted Roosevelt’s appetite for a hunt. The wolf eluded them that day but Roosevelt told Lucille if she could catch the wolf, he would invite her to his inaugural parade. Some claim she later roped the wolf, then killed it, others say she shot it at five-hundred yards. But by all accounts, she sent the pelt to Roosevelt who displayed it in the White House after he and McKinley won the election. Lucille and family attended the inauguration, and Roosevelt reportedly gave her a saddle and an 1873 Winchester.”

Lucille went on to travel the country with a wild west show, Mulhall’s Congress of Rough Riders and Ropers, performing tricks and showcasing her shooting prowess. Here's one of my favorite lines from Lang’s book:  “I felt sorry for the girls who have to attend so many teas and be indoors so much.” My sentiments, too!

Societal change can take decades and certainly doesn’t happen overnight, but it’s important to give all girls, like Lucille, opportunities to pursue their dreams and develop their talents. I know many sporty girls and women will be marching this weekend to honor and protect our rights, our safety, our health, and our families - recognizing that our vibrant and diverse communities are the strength of our country.

Posted by Brenda Barrera at 5:12 PM No comments:

There are some awesome Sporty Girl Books coming out in 2017. If you know of any more, please add them in the comments! To make them easy for you to add to your TBR list, here is a link to all of these books on Goodreads Listopia.

Gabby's summer vacation isn't shaping up to be that great. Her dad was just deployed overseas, and Gabby is staying at her grandmother's house with her mom and baby sister until he returns. The one bright spot is that Gaby plans to sign up for the local softball league her greatest love and a passion she shares with her Dad who was a pitcher in college. But when Gabby goes to sign up for the summer league, she discovers that there wasn't enough interest to justify a girl's team this year. And to top it off, a horrible miscommunication ends with Gabby signed up to participate in the Miss Popcorn Festival the annual pageant that Gabby's mom dominated when she was younger. Besides not having any interest in the pageant life, Gabby made a promise to her dad that she would play softball for the summer. Since her pitching skills rival any boy her age, Gabby creates a master plan: disguise herself as a boy and sign up for the boy's baseball team instead and try to win the pageant to make Mom happy. Can Gabby juggle perfecting her pageant walk and perfecting her fastball? Or will this plan strike out?

Garland, Derby, and Triple Clark spend each season traveling highways and byways in their Rambler until summer, when small-town Ridge Creek, Virginia, calls them back. There they settle in, selling burgers and fries out of Garland's Grill after each game the Rockskippers play in their battered minor-league baseball stadium. Derby's summer traditions bring her closer than she's ever been to a real home that isn't on wheels, but this time, her return to Ridge Creek reveals unwelcome news. Now the person Derby loves most in town needs her help and yet finding a way to do so may uncover deeply held stories and secrets.

Sam Barrette's life is finally going in the right direction. She's made the boys' travel baseball team, her friendship with Mike is turning into something more, and she's even connected with her stepmother. But a cross-country family camping trip filled with secrets and surprises challenges everything she thought she knew about what the future will hold. To save her dreams, Sam must find a way to fix her perfect trip.

(Note - this book is by one of our sporty girl book bloggers!)

The Football Girl by Thatcher Heldring

The summer before Caleb and Tessa enter high school, friendship has blossomed into a relationship . . . and their playful sports days are coming to an end. Caleb is getting ready to try out for the football team, and Tessa is training for cross-country. But all their structured plans derail in the final flag game when they lose. Tessa doesn t want to end her career as a loser. She really enjoys playing, and if she's being honest, she likes it even more than running cross-country. So what if she decided to play football instead? What would happen between her and Caleb? Or between her two best friends, who are counting on her to try out for cross-country with them? And will her parents be upset that she's decided to take her hobby to the next level? This summer Caleb and Tessa figure out just what it means to be a boyfriend, girlfriend, teammate, best friend, and someone worth cheering for.

Gabby Garcia's Ultimate Playbook by Iva-Marie Palmer
Release Date: May 9, 2017
If life were a baseball game, all-star pitcher Gabby Garcia would be having her Best. Season. EVER Until she's suddenly sent to another school and her winning streak is about to disappear both on and off the field. But Gabby never gives up She has a PLAN to keep her champion status intact, and every step of is written out PLAY by PLAY. How could it not work?

The Kicks: Under Pressure by Alex Morgan

It's spring, and school soccer season is back and so are the Kicks Devin is excited to be reunited with her teammates, and after they performed so well in the fall, she has high hopes for a championship win this time around. But it was easier being on the Kicks when nobody expected them to win. Now there are high expectations, and some of Devin's teammates are worried about living up to them. As the start of the season approaches, the girls begin to feel the pressure. Will the Kicks get their heads in the game in time to start the season right?

Maya is a passionate soccer fan eager to start playing soccer herself. This is extra challenging because soccer is considered a "boys' game" in Malaysia in 1986. She teaches herself basic soccer skills with only her mother and a potted rosebush as training partners, then gradually persuades enough girls to join her to form a team, all the while trying to keep her unpredictable biracial family together. Reading Maya's witty, observant first-person narrative will make readers want her on their team, and they'll cheer her on as she discovers that winning is great—but losing doesn't mean defeat. 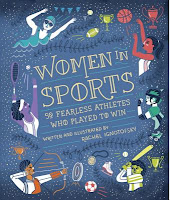 Women in Sports by Rachel Ignotofsky
Release Date: July 18, 2017
A charmingly illustrated and inspiring book, Women in Sports highlights the achievements and stories of fifty notable women athletes--fromwell-known figures like tennis player Billie Jean King and gymnast Simone Biles, to lesser-known athletes like skateboarding pioneer Patti McGee and Toni Stone, the first woman to play baseball in a men's professional league.
Covering more than forty sports, this fascinating collection also contains infographics about notable women's teams throughout history, pay and media statistics for female athletes, and muscle anatomy. Women in Sports celebrates the success of the tough, bold, and fearless women who paved the way for the next generation of athletes. 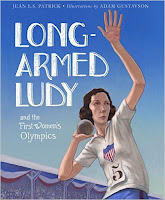