Interview with Out of Left Field author Ellen Klages 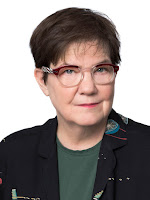 After getting a chance to read Out of Left Field, I was very excited to interview the author, Ellen Klages. Ellen Klages is the author of three novels about the Gordon family: The Green Glass Sea, which won the Scott O’Dell and New Mexico Book Awards; White Sands, Red Menace, which won the California and New Mexico Book Award; and Out of Left Field, published in 2018. Previously,  she was a staff writer at the Exploratorium museum, where she coauthored three books of hands-on science experiments for children and their families to do together: The Science Explorer; The Science Explorer Out and About; and The Brain Explorer. She also writes award-winning science fiction and fantasy for adult readers. She lives in a small house in San Francisco full of odd and interesting objects. Visit her website at www.ellenklages.com.

Out of Left Field is part of a larger family saga. Why did you decide to take the series in this

In the beginning of my first book, The Green Glass Sea, Dewey and Suze are ten years old. By the end of the sequel, White Sands, Red Menace, they're fifteen. They’re young adults. But . . . at the end of the second book, in 1947, their mother, Terry Gordon, is pregnant. That gave me the opportunity to jump ahead a decade, to 1957, and continue the family story with a brand-new focus—a sporty, spunky ten-year-old pitcher named Katy.

I really loved the girls' baseball focus in Out of Left Field. What made you want to tell this story? Were you a baseball player when you were a kid?

I wasn't. I was definitely an active kid—riding my bike, climbing trees, swimming in the creek—but except for playground activities and summer camp games, I wasn't really interested in organized team sports. I became a baseball fan in my mid-30s, listening to the Giants and the As on the radio.

But when I worked for the Exploratorium museum, I was part of a team creating a website—The Science of Baseball. (http://www.exploratorium.edu/baseball/). I don't have a science background, so I instead I proposed a page about women baseball players. I had stumbled across Toni Stone, and figured there might have been others. I love research, and ended up with a lot more content than I could cram into one web article. I made a folder for my notes, then filed them away until I could figure out what I should do with them next.

Fast forward twenty years, and two novels about the Gordon family. Dewey was into engineering and science, Suze was an artist. I wanted their younger sister to be just as captivated by something completely different. What do most people think is the opposite of science or art? Sports. Oooh—what if Katy played baseball? I dug out my old files, and got fascinated all over again by the forgotten history of these amazing women.

In the book you have Katy research famous female baseball players. How did you decide which players to include?

That was one of the trickiest parts of writing this book. I could only use information that would have been available to a bright ten-year-old in 1957.

Nowadays, lot of people know about the AAGPBL, because of the movie, A League of Their Own,but it didn't come out until 1992. And most of the Exploratorium research I'd done on women baseball players was based on books that were also published in the 1980s and '90s. I’d relied on the references that writers Barbara Gregorich, Debra Shattuck, Susan Johnson, and Gai Berlage and others included. They had done years of research, digging through archives and primary sources.

The trouble was that, back in 1957, there weren’t anybooks about women in baseball, and it wouldn't have been realistic for a fifth grader to be able to have access to those primary sources or archives. How was I going to give Katy even an inkling that her heroes wereout there?

I spent four long afternoons in the downtown San Francisco library, looking through the Readers Guide to Periodical Literature, volume by volume, hoping to find a reference that Katy coulddiscover. I almost whooped out loud when I found the 1931 article about Jackie Mitchell.

With the Encyclopedia of Women and Baseball open in front of me, I started making lists of women that I could include in Out of Left Field. Women have been playing professional baseball for more than 140 years, and I wanted the book to show as wide a range as possible.

Eventually I chose a dozen players, from the 1890s through the mid-1950s. I picked some who were contemporary enough that Katy would have heard of them, like Babe Didrikson, and others because they gave me the opportunity to connect different eras -- the AAGPBL, the Bloomer Girls, the Negro Leagues. I was delighted when I found out that one of the players in the AAGPBL came from the same hometown as Alta Weiss. And that Toni Stone lived only a mile or two from Katy's house.

In a lot of ways, Katy's journey is as much about research as it is about playing baseball. She’s solving a mystery, tracking down clues and following leads and her own curiosity, getting excited when she uncovers a hidden piece of history.

As for my own research? That didn’t have the same constraints as Katy’s, and I’d found so much more I wanted to share. In the back of the book are twelve detailed player biographies, my non-fictional gift to all the curious girls of 2018.

Tell us about your journey. How did you get your first book published?

My journey is not at all typical. I didn't start writing professionally until I was in my mid-40s. I sold my first story, “Time Gypsy,” and it was nominated for several awards in the science fiction and fantasy field. I followed that with a handful of other short stories, some of which I read aloud at conventions and conferences.

After one of those readings, a tall, red-haired woman came up to me and told me she enjoyed my work. “You write children's stories,” she said. I got a little indignant. “I do not,” I replied. “I write stories with children in them.” She shrugged, and told me that she was the editor of a line of children's books, and that if I ever wrote a novel, I should get in touch. She gave me her card. Her name was Sharyn November, and she worked for Viking, in New York.

I went back home, and thought, “An editor in New York just asked me for a book. I shouldn't ignore that.” So I lay awake, trying to think of a topic for a children's book: Puppies? Little cottage in the woods? Elves? None of those interested me in the least. Then late one night, I thought of a short story I'd written, “The Green Glass Sea.” It was about two girls having a picnic with their family on the atomic test site at Trinity, New Mexico.

I sent the story to Sharyn.

To my great surprise, she wrote back. “That would be—different,” she said. “Let me see 90 pages and an outline, and we'll talk.”

It took me more than a year to write those 90 pages, and to figure out what the novel would be about. Since I already had a career as a science fiction short story writer, I'd planned to have the book be SF, and the outline ended in July of 1947, in Roswell, New Mexico, with the landing of an alien spacecraft.

Sharyn liked the 90 pages, and most of the outline, but not the ending. She asked me to reconsider. Hmmm. The book hadbecome much more historical fiction than SF. I agreed.

The result was my first novel, The Green Glass Sea, which was published in 2006. In January of 2007, I answered my phone and was stunned to find out that my book had won the Scott O'Dell Award, given to the best historical fiction for children each year.

As I said, my journey is not at all typical.

Do you have any advice for someone writing a sporty girl book?

Write with the truest voice that you can. Write for your “inner sporty girl,” the book you would have lovedto read when you were a kid, but which didn't exist yet. Somewhere in the world there is a young girl just waiting for thatbook to inspire her to be the hero of her own story.

If you know a sporty girl, talk to her. Find out what sheloves about playing.

Sporty girls are active. They are brave and strong. They have skills and determination and focus. They think a couple of steps ahead. They don't give up easily. And no two are alike.

Is there anything else about you or your books you would like to tell us?

I hope you enjoy Out of Left Field, and that Katy's journey inspires you to follow your own dreams.

If you want to read more about the Gordon family, you'll find their stories in my first two books, The Green Glass Seaand White Sands, Red Menace.

As I mentioned, I also write science fiction and fantasy for adults. I have two collections of stories, Portable Childhoods and Wicked Wonders. Many of those stories feature sporty girl characters.