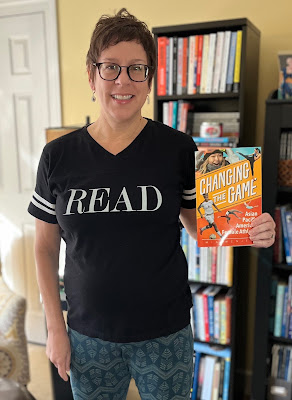 I recognized several of the women profiled, like New York City Marathon and Boston Marathon champion Miki Gorman [Japanese American], who ruled the roads in the late 1970s. I did not know she moved to the U.S. at age 28 with only $10 in her pocket! Another was two-time Olympic Gold medalist Chloe Kim [Korean American], who dominated the halfpipe and slopestyle competition to take Olympic gold medals in 2016. Heads up: Chloe will be competing in the 2022 Beijing Winter Olympics.

There were some athletes who I admit that I was not familiar with like EJ Lee Smith [Korean American], a college point guard phenom whose father didn’t know she played basketball until he saw her on TV and Anona Napoleon [Native Hawaiian] who was surfing the big waves back in the 1950s and dominated ocean sports. A diving accident left her paralyzed at age 19, but she made a full recovery and was atop the podium, winning the 1961 Mākaha Surfing Competition.

Each entry opens with a relatable question to engage the reader, such as, “Would you join a boys’ team as the only girl?” Four-time Olympic medalist Julie Chu [Chinese/Puerto Rican American] joined a boys’ ice hockey team because girls had no leagues. I remember watching on TV and cheering gymnast Amy Chow [Chinese American] at the 1996 and 2000 Summer Olympic Games but was surprised to learn she was also a pole vaulter and diver in high school and continued as a student-athlete diving for Stanford University.

CHANGING THE GAME is a slim, MG paperback that includes photos, pull-out quotes, athletic accomplishments, interesting anecdotes, and a list of URLs to learn more about the athletes at the end. Highly recommend this sports book that will surely inspire readers and an important contribution to collections that reflect the diversity in our sports world. Plus, an ideal pick to tie into the upcoming National Girls and Women in Sports Day on February 2, 2022, and Beijing Olympic Games February 4-20, 2022.

Gallery of Our Free Posters

Posted by Brenda Barrera at 9:59 AM No comments: