Cover Reveal: Any Way You Slice It by Kristine Carlson Asselin

We are so excited to be able to show off the new cover for Kristine Carlson Asselin's Any Way You Slice It.

About the book: Penelope Spaulding just can't catch a break. Between long hours at the family restaurant, homework, and her parents' plans for her future, it's hard to find a spare moment to breathe. But when she laces up her skates and steps on the ice, everything slips away...
Racing around the rink allows her to blow off steam after yet another fight with her dad about going to culinary school. So when Jake Gomes, the bad boy who lives down the street, dares her to join the Rink Rats, the local misfit hockey team, she surprises herself and joins in silent defiance of her father and his expectations.
The more she plays, the easier it is to keep lying, and soon Pen finds it impossible to come clean. She’s sneaking out to practice—and loving every minute of it. It doesn’t take long for her to fall in love with hockey…and Jake’s not half bad either. But she knows it can’t last. As soon as her dad finds out, she’ll be benched. For good.
She’s absolutely not going to tell her parents until she’s sure it will be worth the inevitable fight. Not only is she skipping shifts at Slice Pizza while a foodie reality show is on the horizon, but her lies are starting to take their toll on her game. It’s only a matter of time before everything falls apart.
With the team counting on her and with her relationship with Jake on the line, will she have to sacrifice the thing she wants most for the people she loves? Or can she step up and take her best shot?

And now for the big reveal! 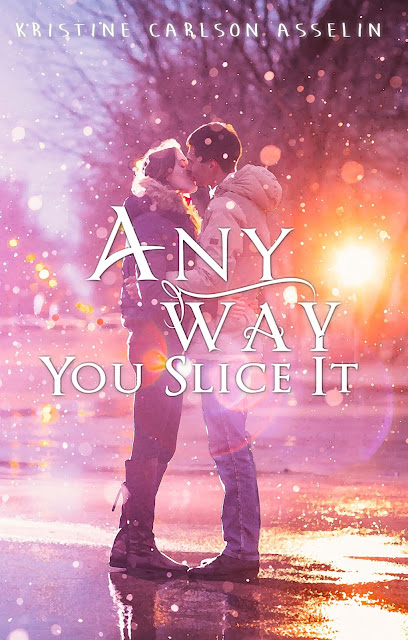 Any Way You Slice It will rerelease in November. If you are in the Littleton, MA area, you can celebrate with the author at Valley Wild Books.

Can't be there? Celebrate at home with this wonderful pizza dessert recipe:

ANY WAY YOU SLICE IT
Penelope’s Dessert Pizza

*Penelope would have you know that using a pre-made dough is cheating. But some of us can’t stay up past midnight to pound out the dough like she can. So we happily use pre-made dough.

Directions
1.     Preheat oven to 400.
2.     First things first, roll out the crescent rolls into 8 triangles—be sure to use an ungreased cookie sheet. These babies are pre-greased so you don’t need anything else.
3.     Cut in the butter to the mixture of sugar, cinnamon, salt and flour to form crumbles. Use a fork or a pastry blender or your fingers! Be sure the butter is COLD for best results. Try not to eat too much of the crumble, but it will be tempting. Licking fingers is excusable.
4.     Sprinkle the dough with crumbs and throw those bad boys into the oven for 8 to 12 minutes.
5.     After it all cools, cut into smaller triangles and drizzle with glaze.
6.     And now the fun part: EAT and Enjoy!

If you make these, take a picture and post with #AnyWayYouSliceIt and don’t forget to tag @KristineAsselin w/ all your pizza photos. To learn more about Kristine and her books, visit her online.

In January we gave you a list of Sporty Girl Books coming out in 2017 but we were only able to find books from Jan - August. Here are three more to add to your list.

A newbie to the track team, Patina must learn to rely on her teammates as she tries to outrun her personal demons in this follow-up to the National Book Award finalist Ghost by New York Times bestselling author Jason Reynolds.

Finding the Edge by Karen Chen

Figure skating icon and U.S. National Champion Karen Chen tells the amazing story of her rise to the top, featuring never-before-seen photos and behind-the-scenes details from her journey on and off the ice!

Agatha Parrot and the Heart of Mud by Kiartan Poskitt

Martha’s mom has banned her from playing soccer, and it’s up to Agatha Parrot to find a way to get her back into the game. Meanwhile, Agatha’s big brother, James, receives an email from an unknown girl, and Agatha intervenes to start a correspondence on his behalf. When she discovers the girl’s love of spelling might hold the secret to helping Martha get permission to play soccer, the emails turn very warm indeed. Several forged emails—and a few spelling tests—later, will Martha get to play in the big game? And what will happen when Agatha’s unknowing correspondent meets the real James?