Interview with The Distance to Home author Jenn Bishop 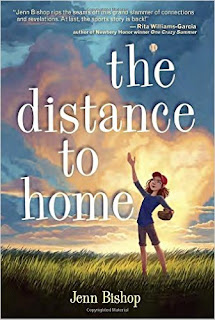 I am so excited that in only a few days another girl's baseball book will be out in the world. The Distance to Home is about an all star pitcher named Quinnen. Here's a blurb about the book:

Last summer, Quinnen was the star pitcher of her baseball team, the Panthers. They were headed for the championship, and her loudest supporter at every game was her best friend and older sister, Haley.
This summer, everything is different. Haley’s death, at the end of last summer, has left Quinnen and her parents reeling. Without Haley in the stands, Quinnen doesn’t want to play baseball. It seems like nothing can fill the Haley-sized hole in her world. The one glimmer of happiness comes from the Bandits, the local minor-league baseball team. For the first time, Quinnen and her family are hosting one of the players for the season. Without Haley, Quinnen’s not sure it will be any fun, but soon she befriends a few players. With their help, can she make peace with the past and return to the pitcher’s mound?

Today I am interviewing the author of The Distance to Home, Jenn Bishop. Jenn is a former youth services and teen librarian. She is a graduate of the University of Chicago, where she studied English, and Vermont College of Fine Arts, where she received her MFA in Writing for Children and Young Adults. Jenn lives just outside of Boston, where she roots for the Red Sox.

Your main character plays baseball. Why baseball? Were you a baseball player 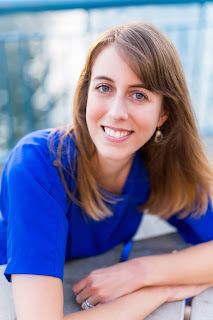 when you grew up?
I grew up playing softball in my town’s league – though to be honest, I was never that good and certainly not as talented as Quinnen – and am an avid fan of the Boston Red Sox. But the true inspiration for the baseball elements in The Distance To Home came from attending a Kane County Cougars minor league game back when I lived in Chicago. My husband’s a huge Oakland A’s fan and the Cougars were at that point their minor league affiliate. At the game, we sat behind a couple that seemed to know an awful lot about the players (okay, we were eavesdropping a little) and so we chatted with them only to discover that some of these players stayed in their house for the summer as part of the team’s homestay program. How cool, right? (Life goal. Truly.) In earliest version of the book, Quinnen was a superfan of the Bandits but not actually a ballplayer herself. It was in revisions with my agent that her being a star pitcher developed into the final version in the story.

Tell us a little more about your main character, Quinnen.
Quinnen’s the kind of kid that I think – I hope! – a lot of readers can see themselves in. She’s got an impulsive streak, but she also has a heart of gold. What readers will find in the book are essentially two different Quinnens: last summer’s and this summer’s. Quinnen’s journey is finding her way back from the Quinnen she is when the book opens in the current summer, quiet and reserved and still full of remorse, to the Quinnen of last summer, vibrant and spunky and full of love for playing baseball.

Even though The Distance to Home is a baseball book, it's about so much more than baseball. How did you decide how much baseball to include?
A good rule of thumb for me has been what the plot dictates. In this case, in the “last summer” chapters of the book, baseball was a big part of Quinnen’s identity, and her team was moving forward to a tournament, so we see the key moments in that journey. In the “this summer” chapters, we see Quinnen’s love for the Bandits at minor league games and around the ballplayers, since her family is hosting one. I was thrilled to be able to include an author’s note and glossary, which I hope makes the book more accessible to readers who aren’t as familiar with baseball as Quinnen is.

Do you have any favorite sporty girl reads?
One that absolutely loved was Audrey Vernick’s The Kid from Diamond Street, a non-fiction picture book about Edith Houghton, who tried out for a professional women’s baseball team in 1922 as a ten year old and made the team (!!!). She was also the first female scout for Major League Baseball and her life story is about as cool as they come. I wish I’d had this book as a young girl – what a woman to look up to!

What is your all time favorite book?
How about my favorite dozen? This is a really hard question, as I have so many favorites. I guess if I had to pick one, right now I’d say A Tree Grows in Brooklyn. That one grabbed me from the first page and never let go.

Any big plans for the book release?
I’m having a launch party at my favorite local indie bookstore, Porter Square Books, on the big day. I’m also planning to tweet some of my favorite Red Sox players in the hopes that they might retweet about the book. Fingers crossed!

The Distance to Home will release on June 28. Make sure to preorder a copy!
Posted by S. Mozer at 1:58 PM