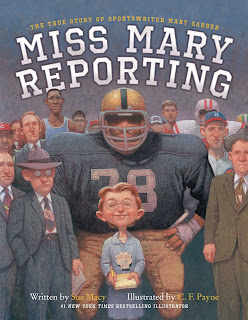 I recall learning about Mary Garber several years ago when I joined the Association of Women in Sports Media (AWSM) and read about their highest award named in her honor. I should have known about Garber from my college days, and maybe I did but simply forgot, but now thanks to one of my favorite picture book authors, Sue Macy, more readers will become familiar with this inspirational pioneer.

To begin one has to go back to 1944, well before Erin Andrews, Leslie Visser or Christine Brennan became household names, when women went to work in factories and businesses to fill in for men who were off fighting in WWII. Garber, who discovered a passion for sports (especially baseball and football) at a young age, was writing for a newspaper and moved to the sports department to fill the staffing void.  Her work was well received and she was assigned back to the sports desk after the war ended. She covered sports legends such as her role model, Jackie Robinson, and non-traditional events like Soap Box Derby races. In 1986, she retired and in 2008 was inducted into the Hall of Fame of the National Sportscasters and Sportswriters Association.

The media plays a critical role in shaping how we view and perceive each other.  Garber is credited for bringing equality to sports reporting—a great athlete is a great athlete just as a well-written sports story (written by a man or woman) can inspire girls as well as boys. A groundbreaker, Garber paved the way for female reporters to gain equal access to locker rooms to interview athletes.

Once again Macy has contributed to preserving the legacy of another sporty girl. Garber was a “tiny bit of a girl” who played quarterback for her Buena Vista Devils and followed her passion becoming one of our first women sports reporters. Her life story serves as an example for girls, who not only like to play sports but also document the drama and action, to choose a career in sports media.

I have also been a fan of award-winning illustrator C.F. Payne since I read Brave Harriet which he illustrated. His work has a timeless Norman Rockwell feel that compliments the text.

Posted by Brenda Barrera at 3:17 PM