How One Woman, A Sewing Needle, And A Bicycle Changed History 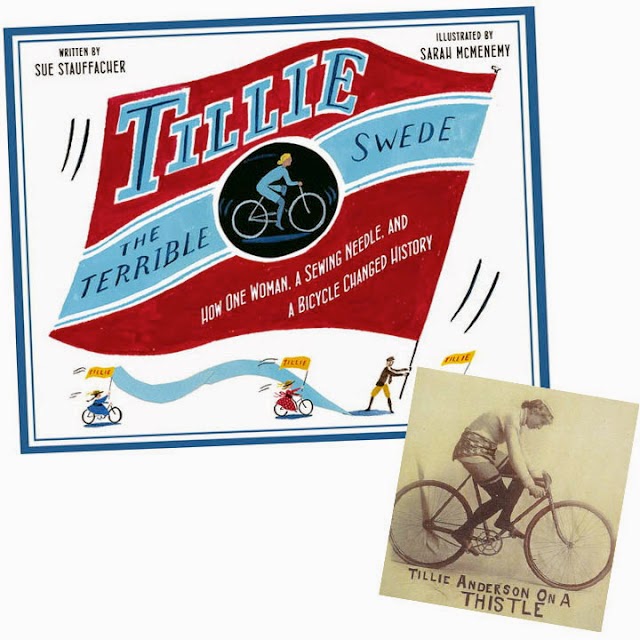 I picked this children's picture biography up on a whim at the library last month because the title is awesome, I'm a quarter Swedish, and I like to ride.

I'd never heard of Tillie Anderson before opening this book, but the author, Sue Stauffacher, and the illustrator, Sarah McMenemy, brought her to life so well that I feel as if we're dear friends.

Tillie is a great example of someone who doesn't let society dictate what they can do, but works towards her dreams, and in so doing, blazed a path for you and me. She came to America with her skills with a needle, but she wanted to ride a bicycle and feel the wind whip through her. But, ladies' dresses in the 1890s didn't go well with riding bikes. 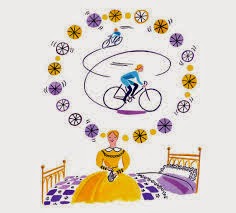 
Although Women's Bicycle Racing began in 1879, during the high wheel era, it was considered more a novelty than a sport until the advent of the diamond-framed safety bicycle in 1890.

Perhaps no one made a greater contribution to the acknowledgment of women as serious competitors in bicycle racing than Tillie Anderson.

Tillie, who from the years 1897 to 1902 was known as "female bicycling champion of the world," was born in Skane, Sweden on April 23, 1875. She was the fourth of five siblings. Tillie's reputation for having a strong will and perseverance began early.

After her father died when she was eight years old, she began working for a neighboring farmer during haying and harvesting to help support her mother, brother and three sisters.
In 1891, Tillie and her brother August emigrated to America, joining their older sister Hanna in Chicago. The rest of the family came to America the following year.

Tillie found work as a seamstress in a tailor's shop. In two years, she had saved enough money for a bicycle. Newspapers of that era like to say that she was thin and weak when she first came to America, but she was quoted as saying "I did not take to the wheel for my health, particularly. I suppose it was more for the reason that bicycles were being used by women and I wanted to try the fad."...

By Heather Drieth
Published in "The Wheelmen" 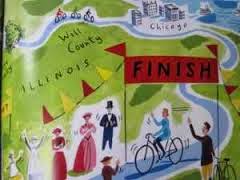 She put her skill with the needle to work and made (scandalous) biking pants. She trained hard and won many records in long-distance cycling, both outdoors and in the velodrome. Many people disapproved of her clothing and her training. (Woman shouldn't sweat.) Doctors even examined her to determine the effects of strenuous exercise on a woman's body. They even put a picture of her leg in the newspaper.

"Although Miss Anderson's limbs are not as regular from an artistic point of view, her general health is better. Simply put, front head to food, she is a mass of muscle."

The book is whimsical and fun in how the illustrator shows her life. All four of my children (boys included) enjoyed this book and requested it more than once.

I highly recommend giving Tillie The Terrible Swede a try, and then getting on your bike and riding fast and hard like she did.