As you enjoy your Superbowl Sunday, here are some of our favorite sporty girl football books to add to your to-be-read list. 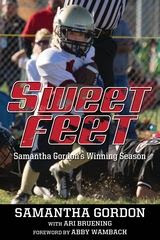 Dairy Queen - YA Fiction
When you don’t talk, there’s a lot of stuff that ends up not getting said. Harsh words indeed, from Brian Nelson of all people. But, D. J. can’t help admitting, maybe he’s right.

Catching Jordan - YA Fiction
What girl doesn't want to be surrounded by gorgeous jocks day in and day out? Jordan Woods isn't just surrounded by hot guys, though-she leads them as the captain and quarterback of her high school football team. They all see her as one of the guys and that's just fine. As long as she gets her athletic scholarship to a powerhouse university.