Women to Watch in Sochi

The Sochi Winter Games begin on February 6th and NBC is going to be providing us with over 1539 hours worth of coverage. Here, in images and video, are some of the women you might want to keep your eye on.

First, the Women’s Ski Jump Team who are a part of olympic competition for the first time EV-ER! That's right EV-ER. Where have they been? Banned from the olympics because – I kid you not – the men in charge thought that jumping and landing like that would hurt their reproductive organs. Bogus. This didn't stop these girls and women from pursuing the sport. They still did it. They checked the jumps for their male counterparts. They still competed. Just not at the Olympics. For more on the story check out this NPR piece from December of 2013 or this NPR piece from 2005.

After 12 years of lobbying to be included in the Olympics, I hope that the team gets tons of support and TV coverage. Here's a great video from the organization Let Her Jump.

Jazmine Fenlator will represent USA as a bobsled pilot. Jazmine didn't have a lot growing up and her family had even less after Hurricane Irene hit their home. In this video she talks about the importance of perseverance and working towards your goals.

Lanny Barnes, an accomplished biathlete and part of two past Olympic teams, was ill during the qualifying race for the Women's Biathlon. Lanny finished 6th and Tracy, her twin sister and also a past Olympian, was 5th. Tracy Barnes surrendered her place on the 2014 Olympic team to Lanny.  In this NPR interview the two women talk about the reason for their decision, and their inspiration and support for each other. Are you a twin? Do you feel that your twin is a part of you? 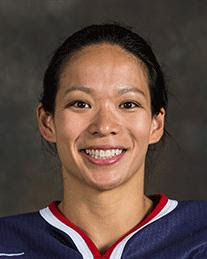 Julie Chu knows that it's better to work than to wish. She is the three time Olympian (two silvers and a bronze) and team captain of the 2012 and 2013 IIHF Women’s World Championship team. Fairfield, Connecticut is her hometown, she went to Harvard, she's has coached at the collegiate level, and has so much experience: world championships, nations cups, professional teams that I can't list them here. Take a look at her amazing resume at her Olympic page.


Tatyana McFadden is a nordic skier and biathlete in the Paralympics which will take place in March after the February games. McFadden is a  Grand Slam marathoner (she won the Boston, London, New York and Chicago marathons!) and an experienced Paralympian. In 2004, 2008, and 2012 she medaled in track and field events. Most recently, at the 2013 International Paralympic Nordic Skiing World Cup in Cable, Wisconsin, she was Fourth in Long Distance - Classic Sitting; and Fifth in Sprint, Middle Distance - Freestyle Sitting. From the IPC website: "Depending on functional disability, a competitor uses a sit-ski, a chair equipped with a pair of skis. Athletes with blindness/visual impairment compete in the event with a sighted guide." When Tatyana was in highschool, they wouldn't let her participate in track events. Her family's lawsuit resulted in Tatyana's Law: The Sports and Fitness Equity Act. (If you are a girl and a para-athlete I'd love to feature you on the blog. Please write to me at annajboll [at] gmail [dot] com.) If this video doesn't inspire you, nothing will. :)

Good luck to all the incredible women athletes who are competing in the Sochi Olympic and Paralympic games and to all girls who have Olympic aspirations!

Posted by annawritedraw at 7:00 AM