Our guest blogger today is Alice Kaltman. I'd like to thank Alice for this great interview with sporty girl Kira Garry. 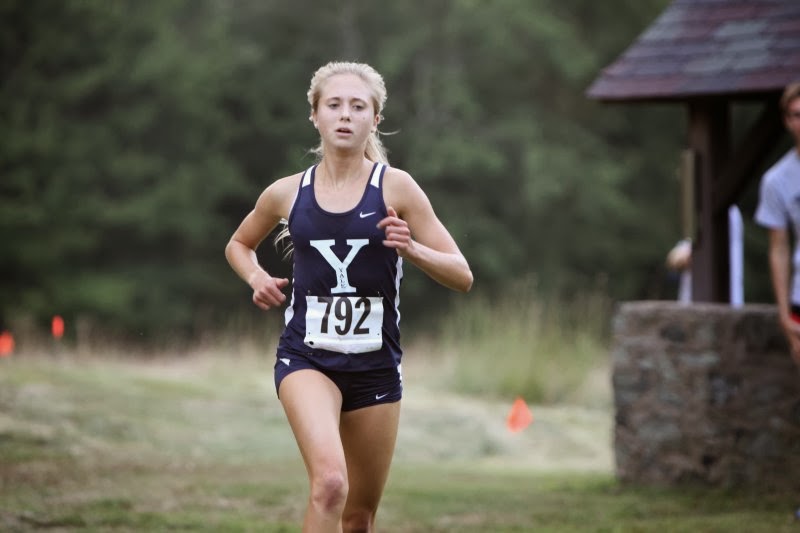 20 year old Kira Garry is one of those girls you just wanna hug. She’s kind, she’s funny, she’s smart, she’s talented, and she can run like nobody’s business. She’s now one of the top steeplechase runners of her generation, and a pre-med student at Yale University.

Kira set the Yale record in the 3,000-meter steeplechase (10:22.81) at the New Balance Boston Twilight Meet this October 2013, earning a spot in the U.S. Junior National Championships, where she placed fifth.

I’ve known Kira since she was four years old. When she wasn’t running, she had her nose in a book. Kira was(and still is) a voracious reader, consuming books with amazing passion and concentration. I recently talked with Kira to talk about the parallels between running and reading, and how her love of books have helped her become such an awesome scholar-athlete. Here’s what she has to share:

AK: Has reading always played a big part in your life? How did your interest in reading start? Who encouraged it?

KG: Yes, reading has always played a huge role in my life. I started reading pretty early and one of my distinct memories was when my dad read me the first Harry Potter before I went to bed and then he started to fall asleep reading to me so I just took the book and said okay, I’m just reading this by myself now! I remember reading “Go Dog, Go!” to my kindergarten class and loving reading aloud. I think I really became a reading fiend in the second grade when I read the Boxcar children, Magic Treehouse, Junie B. Jones, and other young series. My mom definitely encouraged my interest in reading and one of our favorite things to do with my sister was to go to Barnes and Noble and look for books, often sitting and just hanging out there. I was especially obsessed with Laura Ingalls Wilder books, Harry Potter, lots of fantasy books and some sports novels growing up.

AK: Can you say anything about the importance of reading for younger girls who are super athletic like you were?

KG: I find reading to be one of the most rewarding activities. I think it complements the active things I do in my life and is a great way to just relax, but also to become inspired by the athletes or role models I read about. Especially as someone who is competitive, loves to push myself and do lots of athletic things, I think reading is a way to keep things in perspective. I believe reading anything is worthwhile; whether it’s a fantasy novel, non-fiction, the newspaper, or a journal, just the act of reading is something that you can feel good about, learning something new.

AK: Were there any books about athletes or sports you read, when younger, that inspired you?

KG: Yes, definitely! One book I remember particularly well was about a runner named Wilma Rudolph, later called “The Tornado, the fastest woman in the world”. She contracted infantile paralysis caused by the polio virus at age four, and though she recovered she wore a brace on her left leg until she was nine. I was so inspired by Wilma’s story and overcoming her illness to end up winning three gold medals in track and field during the 1960 Olympics, the most medals any American woman had won at that point. I read that book over and over again because I loved her story and her dreams to be an athlete despite adversity. I also read books about Mia Hamm and loads of fantasy books with strong female characters.

AK: Did you wish there were more books about female athletes?

KG: Definitely! There are nowhere near enough! I have to say that most of the inspiring running books I have read have been about men.

AK: Were there any other books, sporty or not, that were your favorites growing up?

KG: Ella Enchanted by Gail Carson Levine , The Wanderer by Sharon Creech, The Mixed-Up Files of Ms. Basil E. Frankweiler by E.L Konigsburg, The Goose Girl by Shannon Hale, The Giver by Lois Lowry, and Baseball in April by Gary Soto. I also really liked the Outsiders by S.E. Hinton.

AK: Do you think there are any parallels between the concentration needed to really dive in to a book and the focus needed to be a competitive long distance runner?

KG: Yes, I think that both reading and running require the ability to shut off the world in a way and become completely absorbed and present in the moment. By focusing on the next page, or the next segment of the run, you end up enjoying the process as opposed to the end result or just the last page of the book. It is a great feeling to become completely absorbed in something as if the world is paused for that time.

AK: Growing up, did any of your more sporty, less booky friends ever make you feel bad for also being a Bookworm?

KG: I don’t think so—at least not in high school, but in middle school I was always reading and I guess sometimes people poked fun that on the bus to the soccer game, or whenever I could I just always had a book out. However, I think that changes when people get older and more mature. I guess for the girls whose sporty friends do make fun of them…read on! I think some people equate sportiness as the opposite of nerdiness or even reading, but these are two things that go extremely well together J

AK: You go to Yale, which is probably the coolest University on the planet, but where you are expected to work super hard. You’re on the track team. You’re pre-med. How do you find the time to read now? Is there any time? Where do you read? On the bus to meets? In between practices? Never?

KG: I try to find time read, but it is definitely difficult. I read most frequently on the bus to meets and at my meets as a way to distract myself from the competition especially if it is a big meet. It’s also a nice break from my studies. I find myself more interested in non-fiction books these days. I recently read “Letters to a Young Scientist” by Edward O. Wilson and “Mountains Beyond Mountains” by Tracy Kidder. I like reading right before bed at school, even if it is just a couple pages. I love being able to read a ton over December break because I don’t have any classes to worry about. And I read tons over the summer.

AK: Do you have any advice for younger Sporty Girls who love to read, but find it hard to carve out the time?

KG: Sure, I would say that most of the time, even if you think there isn’t enough time in the day to fit in some reading, there usually is. Limit the amount of TV or computer time and instead keep a book or two (in case you want options) next to your bed and then read 15-30 minutes each night. It’s a nice way to wind down after an active day, before you go to sleep. I would also say that often if you have schoolwork and need a break, reading is a nice way to refocus your brain especially because you can just sit on a couch, have a snack, and get wrapped up in a book. I think it’s hard when sometimes a tv show or movie can seem much more interesting, but reading a good book is a great feeling. Maybe even read the same book as some of your friends! On runs with my team, if we have all read the same book it makes for a fun conversation because everyone has something to offer and a different opinion. Those kinds of conversations are what make reading fun.

Alice Kaltman is a surfer, swimmer, and dancer. She’s also a former triathlete and personal trainer, but hey, there’s only so much time in a day. On the odd occasion when she can sit still, Alice writes YA and MG fiction about mermaids, surfers and the occasional troll. For more about Alice, check out her website: alicekaltman.com, follow her on Twitter @AliceKaltman, and catch her random musings on Tumblr alicekaltman.tumblr.com

Posted by Kristine Asselin at 4:44 PM