Author Interview: Maria Padian and Giveaway of Jersey Tomatoes Are The Best!

In this, the debut month of Sporty Girl Books Blog, the regular contributors are introducing ourselves by way of some of our favorite books and authors in the sporty book world. Maria Padian is the author of three young adult books: BRETT MCCARTHY: WORK IN PROGRESS, JERSEY TOMATOES ARE THE BEST, and the recently released OUT OF NOWHERE.


I’m so lucky that Maria lives in my Maine town. We first met on the fields of the local college. We were not playing any sports but walking out dogs. Lucy is my yellow lab and Frisbee is Maria’s Australian Shepherd. For the interview, we met at the Little Dog Café and discussed all things kidlit and sports. Grab a cup of something warm and join us!

Soccer plays a role in Brett McCarthy… and Out of Nowhere. Tennis and ballet are in Jersey Tomatoes Are the Best. Are those sports in your background? What sports are you involved in now?

I’ve played soccer, softball, basketball.  I ski, hike.  Bike.  But the sport I’ve played most consistently, and which I love, is tennis. I started in third grade and play competitively to this day, on a USTA women’s team.  It’s great to still have sports in my life.  Another sport I’ve loved … but lost … is rowing.  I rowed crew back in college, first in Oxford (England) where I learned to row British style – faster hands and a three-part recovery.  I had to relearn when I came back to America, and rowed with a club in Atlanta, Georgia.  It’s a fantasy of mine to return to rowing again … you’re inspiring me, Anna! 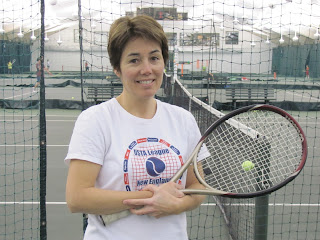 How do you use sports as vehicle for character, conflict, and tension in your books.

I don’t usually go about a book thinking that I’m going to make a character an athlete. It’s more that my characters are naturally athletes. I’m drawn to young women who are not afraid to be bold, competitive and aggressive.

In Jersey Tomatoes Are The Best, Henry, a tennis player, is battling personal demons. She struggles to understand the point of competition, to question the expectation that she play tennis, and to win on her own terms. She asks, am I winning the way I want to win, being the athlete I want to be, and am I becoming the kind of person I would admire.

Eva is a committed ballerina, and I never saw her as an athlete but as an artist. Both of them struggle to take ownership of what they have become passionate about [tennis and ballet]. The struggle is between expectations and passion. Do you do something because people expect you to even if you don’t love it? Or, do you do something you love even though you might not be great at it?

Eva, in Jersey Tomatoes Are The Best, is dealing with anorexia. Talk to me about healthy eating and healthy habits for athletes.

You know, I think there is a misunderstanding about eating disorders. I think about this more as a mental health issue than a fitness issue. Anorexia is about dealing with stress and anxiety. Some girls rise above stresses and strains and some succumb to it.

You write the eating disorder as a male voice named Ed inside Eva’s head. How did you come up with that?
I went to see a play where the eating disorder was portrayed as male. The character was smarmy and cruel, dressed in a leather jacket and dark glasses.  He was emotionally abusive.  I tried to write Ed similar to an abusive boyfriend.  Eva is very vulnerable to those negative voices. I think a lot of it has to do with a person’s inner compass. What do we choose to believe about ourselves? So much of sports is about having a mental edge and great athletes are great optimists. I was playing tennis against someone who was better than I was and going at each ball with the thought, “Am I going to get it?” Then the person I was playing with told me to instead think, “When I get there, where am I going to put it?” That mental shift made a huge difference in my game.

Now for the lightning round:

What is your favorite sport to play?
First tennis, but rowing is a close second.
What is your favorite sport to watch?
If tennis is on TV, I’m there. I also live with a bunch of crazy basketball fans so I watch a lot of basketball.
Which athlete would you most want to meet?
Andre Agassi. His book OPEN came out at the same time as Jersey Tomatoes Are The Best and I’m really interested in his story.
I know you have a dog named Frisbee. Is Frisbee a good exercise partner?
Frisbee gets me out of the house on the days that the weather is so wet or cold that I’d normally stay inside. Once we’ve gone for a walk, I always feel so virtuous.

You too can be virtuous by signing up for our rafflecopter give away, which I’ve included in this post. The winner will receive a lovely collection of books including JERSEY TOMATOES ARE THE BEST signed by the sport Maria Padian. I also picked up an awesome pair of cycling tire levers (pink) at the recent women’s ride that I participated in so I’ll throw those in as well.

It is also virtuous to comment below! What do you think: Are eating disorders more about fitness or mental health? How much of your sport is about having a mental edge? I’d love to hear from you. Anna
a Rafflecopter giveaway
Posted by annawritedraw at 1:22 PM