A recent Team USA Sports Scene Weekly had a headline that caught my eye: “U.S. Women's Natl Team Wins Four Nations Cup: U.S. Comes From Behind to Defeat Canada 3-2 in OT.” The Four Nations Cup is a women’s ice hockey tournament held since 1996 and the U.S. has won the title six times. 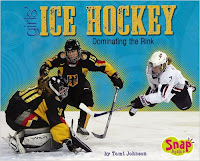 I was curious about the number of books about girls playing ice hockey. Of course, the first one that came to mind was Sporty Girl Books contributor, Kristine Asselin’s YA romance ANY WAY YOU SLICE IT and GETTING IN THE GAME by Dawn FitzGerald, but when it comes to finding nonfiction titles it’s disappointing – most are pretty outdated.  A quick trip to my library and I found one book, GIRLS’ ICE HOCKEY: DOMINATING THE RINK by Tami Johnson published by Capstone Press. It’s a good introductory snapshot of the sport with information on rules, basic terminology, plus advice and a few profiles of players like Cammi Granato and Natalie Darwitz, but the publication date is 2008. Today, the sport has grown and new stars have emerged that warrant some new titles to be added to the shelves. Below are a few more nonfiction titles and some additional resources for teachers and parents.

Four additional nonfiction books
Breaking the Ice by Angela Ruggiero (2005)
Crashing the Net by Mary Turco (1999)
The Hockey Book for Girls by Stacy Wilson (2000)
H.E.A.R.T. by Cassie Campbell and Lorna Schultz Nicholson (2007)
Do you have a more recently published nonfiction title to add to this list? Please feel free to share the title in the comments section below.

Three activities for teachers (a hat trick!)
1. Invite a girl from a local high school, college, or professional ice-hockey team to visit your class. Ask them to bring their equipment bag so students can learn what they need to wear and why those bags are so heavy!
Tie in book:  Clothesline Clues to Sports People Play by Kathryn Heling and Deborah Hembrook (Charlesbridge 2015).

2. Ice Hockey terms include: assist, body check, goalie, wings, and penalty.
Do other sports use these terms?

3.  Okay, so this might be a stretch. Two people share the same name: Hilary Knight.  One is a writer/illustrator and the other is a two-time Olympic Ice-Hockey silver medalist who also scored the winning goal in the Four Nations Cup mentioned at the beginning of this entry.
Research both people and list their similarities and differences.

Overtime Notes
A recommended read for parents from USA Hockey: Pros/Cons: Should MyDaughter Play for a Girls’ Team or a Boys’ Team?