Interview with Warren Firschein, author of Out of Synch 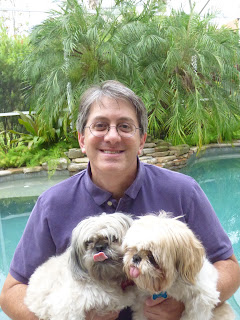 I am very excited to introduce Warren Firschein to you today. I had the pleasure of reading Warren's book, Out of Synch, a few weeks ago. It's the story of Katie Phillips, a thirteen-year-old swimmer who dreams of going to Nationals with her Synchronized Swimming Team but is being pushed by her father to place all of her energy into her traditional swimming. Katie's struggle trying to do something she loves when her family wants her to go another way is something that all tweens and teens can relate to, even if they aren't swimmers.

I interviewed Warren to learn more about what inspired him to write this book.


What inspired you to write this book?

Out of Synch was inspired by my twelve-year-old daughter, Sophie, who has been a competitive synchronized swimmer since the age of eight. When she first joined her team I knew nothing about synchro, but through her experiences I learned what an exciting, fun, and incredibly difficult sport it is. Synchro combines swimming with gymnastics, ballet, and cheerleading stunts, and requires an unbelievable amount of strength, athleticism, and agility. Unfortunately, the sport has low visibility, and all most people know about it is from works of satire, such as the video of those fifth-grade boys performing a synchro “routine” on stage that went viral last year. I wrote the book as a way to promote the sport by introducing it to people who don’t know anything about it, and to hopefully inspire them to try it for themselves. 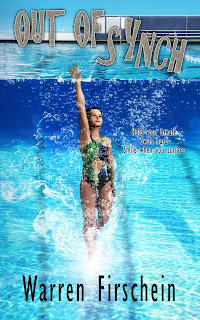 Were any parts of the story hard for you to write?

Without giving away any of the plot, at times it was a challenge to write a story from the perspective of a thirteen-year-old girl, which obviously I’ve never been. Hopefully, I’ve done a credible job. Other than that, the hardest part was finding the proper balance between describing the sport in detail without interrupting the flow of the story.

How accurate is your description of the sport?

Very much so. Since many of my readers may not know much about synchro before picking up the book, one of my goals was to portray the team practices and meets as accurately as possible. Early in the story I describe a training accident during practice, and an older girl on my daughter’s team told me that it was “freaky realistic,” which made me very pleased. However, I took several minor creative liberties with the way a meet is run in order to advance the plot in certain places.

What was the book’s publication journey?

In a word, it was unexpected. Initially, I thought I’d try to get the book published the traditional way, starting with finding an agent to represent me. But while working through my final drafts, I learned that there were going to be some fairly significant changes to the sport starting with the 2014-15 season. For example, they’ve done away with trios and have drastically reduced the number of soloists who qualify for Nationals (which is now called the Junior Olympics). Instead of rewriting the story to reflect these changes, I focused on getting the book published as quickly as possible. To do so, I formed my own publishing company, which is called Chapter Two Press, and released the book myself. I’ve never owned a business before, but I think there’s a need for small presses, and I hope to publish works by other authors in the years ahead.

Katie’s dad puts a lot of pressure on her to give up synchro. What would you tell kids to do if they are being forced to give up the sport they love?

First, I think it’s important for kids in this situation to try to understand why they are being pressured to give up the sport they love. Although it may feel like punishment, that may not be the intent. In Out of Synch, for example, Katie’s father is drawing on his own experiences as a college athlete to help his daughter take the best path toward achieving a successful future. His efforts are misguided, but he is acting out of love. Once you understand your parents’ perspective, you may be able to find a compromise that will allow you to continue to compete while satisfying their wishes. For example, maybe you can offer to give up a spot on a travel team to focus on your schoolwork, and instead play in a local league. Some swimmers will get up early and swim laps before school. Sometimes being an athlete means learning to juggle many different activities, but there’s often a way to fit everything in if you are creative and think positively.

Were there any books that inspired you when you were a kid?

Of course! I loved adventure stories growing up, and I still do. I couldn’t get enough of classic science fiction, such as Isaac Asimov’s robot books and his original Foundation trilogy, but the books that affected me the most include The Hobbit and, when I was a little older, The Once and Future King, which is about King Arthur. When I was thirteen, my counselor at sleep-away camp read The Princess Bride aloud to the bunk throughout the summer, and that’s probably still my favorite book.

What is one thing you would like your fans to know about you or your book?

Most of Out of Synch was written on a tiny netbook on the pool deck while my older daughter was at synchro practice. As for something about me, I’ve wanted to write novels since I was ten, but it took me a long time to learn how to craft a story and develop compelling characters. If there’s something you want to do, never give up, and don’t let other people convince you to stop trying to fulfill your dream. After all, if you don’t believe in yourself, who will? In a nutshell, that’s what Katie must discover for herself in this story.

Let me add that Out of Synch is available through online retailers, and you can purchase a signed copy through my website, www.warrenfirschein.com. I love hearing from my readers!

Thanks so much for doing this interview, Warren. Best of luck to you and Out of Synch.
Posted by S. Mozer at 7:00 AM