"Before Title IX, one in 27 girls played sports. Today that number is two in five. While we still have far to go before every girl has equal access to sports, especially girls of color, it is clear that we are making headway. This summer at the 2016 Rio Olympics, the world watched as woman after woman broke barriers, shattered records and won titles across a multitude of sports."

Now that the Olympics are over, it would be easy to forget all of the amazing female athletes featured over the summer. The quote above is from an article shared on the She Network on the role of Title IX and female athletes in America.

The article, called "Title IX and The Rise of Female Athletes in America,"  connects to a number of other articles about female athletes. In one from the LA Times, it states, “It’s not perfect,” swimmer DiRado said. “But the more girls can grow up and watch Olympics like this, knowing they’re just as good as the men’s teams, it’s goes a long way.’’

It continues, "Can it carry over to an increase in U.S. women’s sports popularity during non-Olympic years? So far, no good. The only stable women’s pro sports league is the WNBA, but that basketball league has benefited from the support of the powerful NBA."

So the fight for increased attention on women's sports continues, but things continue moving in the right direction.
For more about the role of Title IX, check out this book: 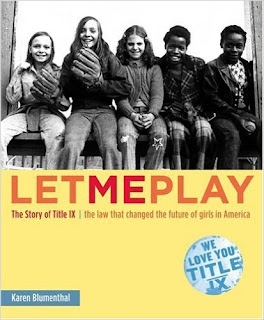