Wendelin Van Draanen came into my radar when I won her book FLIPPED from Liesl Shurtliff's book contract party. (You can check out Liesel's MG fairytale retellings here). But back to FLIPPED, it's a little book with a big, big heart. Years later, as I do little things like admire an old-growth tree or tend my chickens, I think of Bryce being afraid of Juli’s home-grown eggs. For the record, fresh eggs, with their wonderful dark yokes, cannot be beat;)

My fifth-grade daughter handed me THE RUNNING DREAM and informed me I had to read it, and now. It's part of North Carolina's Battle of the Books for the 2016-2017 school year, so tons of middle schoolers will be reading this incredible book, and that makes me all kinds of happy.

An award-winning and inspiring novel.  When Jessica's dreams are shattered, she puts herself back together—and learns to dream bigger than ever before.

Jessica thinks her life is over when she loses a leg in a car accident. She's not comforted by the news that she'll be able to walk with the help of a prosthetic leg. Who cares about walking when you live to run?

As she struggles to cope with crutches and a first cyborg-like prosthetic, Jessica feels oddly both in the spotlight and invisible. People who don't know what to say, act like she's not there. Which she could handle better if she weren't now keenly aware that she'd done the same thing herself to a girl with CP named Rosa. A girl who is going to tutor her through all the math she's missed. A girl who sees right into the heart of her.

With the support of family, friends, a coach, and her track teammates, Jessica may actually be able to run again. But that's not enough for her now. She doesn't just want to cross finish lines herself—she wants to take Rosa with her

When I contacted super famous Wendelin, I was amazed at her kindness, quick response, and willingness to be interviewed on Sporty Girl Books.

THE RUNNING DREAM was reviewed here back in March by Anna, (click here for her take). This book is deeper and more satisying than I expected.  It didn't only focus on main character Jessica and her struggles to run again, but it focused on seeing people, not their condition. Before the accident, Jessica lived in her world of athletes and carb loading, practices and meets. But once she's forced to slow down, she sees people she hadn't even noticed before. She makes friends with Rosa, a younger student with cerebral palsy, and their relationship is the sweetest part of the story for me.
This story felt realistic, from not knowing who she was anymore, to battling insurance, to clueless people trying to be helpful, and her struggle to trust anyone's true interest in her. I'd expected Jessica to run again, but I hadn't expected what she'd achieve by the end of the book. Her story of doing something so much harder for someone else and in the process making herself into a better runner fills me with happiness.

Let's welcome our author. Wendelin, thank you for being on Sporty Girl Books! From your website, "My stand-alone novels have each come from an idea that gripped me and wouldn't let go. In some cases, the idea shot straight through my heart. When it happens, it's like I have no choice but to face the characters and write their stories." Can you tell us about that experience with THE RUNNING DREAM?

I ran the New York City marathon as part of the Exercise the Right to Read literacy/fitness campaign and was really touched by the incredible display of spirit and determination present at the finish line. People in all sorts of physical conditions and people with incredible physical challenges willed themselves to finish that 26.2 miles. Witnessing their willpower and determination was so inspiring. It took everything I had to get over the finish line myself, and that was under regular conditions. How could you go that distance as an amputee, or with muscular dystrophy; or blind?

So the seed was planted there, and watered by my experience as a classroom teacher. A big goal among educators is inclusion, but it’s not always easy to get students to go from the theory of inclusion to the actions required to bring outsiders into their circle—or at least make them a real presence in the broader community. So the notion of a “regular girl” who hadn’t given much thought to the special needs kids on campus finding herself as part of the special needs community really resonated with me. She could become a powerful voice for inclusion—and convey what it feels like to sit at that table.

What grew from that was a desire to model friendship—what would a real friend do to get someone through their dark days? When we’re young we don’t have much experience with this. What do you do when a friend goes through something awful, is depressed, or acts like she wants the world to leave her alone? It’s natural to feel out of your depths or awkward, or just lost. It’s natural to find more comfortable friendships away from all that. So the Fiona character shows us what a good friend does. At some point we will all need a Fiona in our lives—and at some point we’ll likely be called upon to be a Fiona for someone else. It’s helpful to get ideas on how to be that.

I'm always impressed with marathon runners and the inner strength they have to have. I'm glad that experience planted a seed. What events did you run in high school? Did you have a favorite? Could you talk about your own experience with Rigor Mortis Bend?

I ran the 400, 200, and relays which included those distances. I guess the 400 was “my” race, even though it is a killer, and there is a Rigor Mortis Bend. Jessica runs the 400 because I know it intimately.

I'm not surprised one bit that the 400 was your event. As I watched Olympics track and field, I thought of Rigor Mortis Bend. I appreciated Jessica’s tough math teacher, Mrs. Rucker and wonder if she or Vanessa’s mom was the anonymous contributor. Did you have a teacher like Mrs. Rucker?

I will not give up the identity of the anonymous donor in print! After all, she wanted to be anonymous, right? And although I taught math, I didn’t have the tough exterior Ms. Rucker has. It’s interesting to draw from experiences from both having been a student and having been a teacher. When you’re a student you don’t realize your teachers have real lives and their own drama outside the classroom. They’re mostly just homework-generating machines. When you’re a teacher, you’re reminded daily of your own trials and tribulations growing up and there are things you wish you could convey to your students, but because you’re an adult your words will likely not sink in. And so, despite your best efforts, you watch them learning things the hard way. Flipped was mentioned in the introduction—it was very much a case of wanting to talk to my students. So is The Running Dream and Swear to Howdy. I’m careful not to let what I want to convey override the story, but it’s definitely there, nudging contemplation.

Back in April you blogged Bust Through and Bloom, about the three year anniversary of the Boston Marathon Bombing where you spotlighted two girls who lost limbs and have overcome, Heather Abbott, and Adriane Haslet-Davis. Heather Abbott wears stilettos and has a foundation to help other amputees have customized prosthesis and Adrianne completed the Boston Marathon this year. In the post you said "Adrianne and Heather show us that there's a choice you make in your heart when faced with the cruel things life may throw at you." Could you talk more on this point that resonates so much with me?

I personally know people who have experienced setbacks much smaller than Heather or Adrianne and have let those setbacks poison their lives. It really is true that it’s not what happens to us in life, it’s how we react to what happens to us. Most of us will face hard days in one form or another. Part of getting through them requires a vigilant fending-off of negative thoughts because, in the long run, it’s the negative thoughts -- resentment, bitterness, hatred and the like — that will destroy you.

Well said. As someone who's been trying to become published for 6 years, it's a comfort reading that it took you 10 years to publish--and look at you now with 30 solid books and a multitude of awards. Can you tell us what kept you going during that time? It would seem that's a similar spirit and drive that Jessica needed to keep pushing.

To be honest, if I’d known it was going to take me 10 years of getting up at 5 AM to write for an hour before going to work, I might have decided to sleep in. But I didn’t know! And every day I told myself, Today could be the day! until, finally, it was.  I have an incredibly supportive and optimistic husband (Mark Parsons, who is also a writer), and that helped a lot. It was during this Time of Rejection that we developed the philosophy of keeping “Hope in the Mail” – we actively submitted our work and in doing so created a steady stream of rejection letters back to our mailbox. But by having work out there, we could face each day with the notion that Today could be the day!

I love the concept of Hope in the Mail. I might take on Hope in the Email, myself. What was your favorite book growing up?

I loved books with humor, adventure, and mystery. And I loved series books! Each new title was like spending time with a good friend. I read a lot of Nancy Drew and Hardy Boys when I was growing up. The Sammy Keyes mysteries are influenced by that, as well as by seeing girls like Sammy as students in my classroom. Sammy is the girl I wish I’d had as a friend growing up. She’s in middle school, an outsider, funny, tough, and smart. She’s the character who got me out of bed at five in the morning to write. The series – 18 books and its overarching storyline – just wrapped up last year. New covers are coming in 2017 – something I’m super excited about.

Wow, an 18 book series. That is an accomplishment. Do you have a favorite sporty read?

Since I’ve just talked about Sammy, what springs to mind are Sammy Keyes and the Sisters of Mercy – Sammy plays softball and there’s a lot of it in this title. Also Sammy Keyes and the Wild Things – a backpacking /camping adventure that is very active and funny, and also shines a light on the value of protecting Earth’s endangered species.

Keep working toward your dreams! Take it step by step, page by page, day by day…you’ll be amazed how far you go!

Thank you so much for taking the time to be on our blog!

I love that you and Robin McKinley both have whippets!

I didn’t know that! Whippets are awesome J

Wendelin not only writes and runs, but she's also in a Rock-N-Roll band. Here's Wendelin with her band, Risky Whippet, playing at a Sammy Keyes Party.
SaveSaveSaveSave 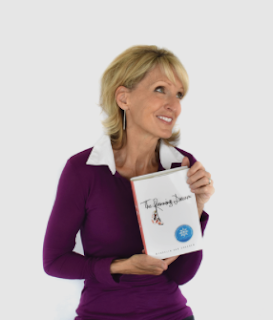