This week, Sporty Girl Books founder and contributor Stacy Barnett Mozer debuts her middle grade novel, THE SWEET SPOT. Stacy and I met on the board of New England SCBWI (NESCBWI) in the late 2000's. At that time, NESCBWI had a pretty conservative view of self publishing but a lot can change in ten years. Online technology makes it easier than ever for authors to create eBooks and distribute them. There are a wealth of 3rd party editors and art directors who can be hired to assist behind the scenes. Too, marketing through social media allows authors to connect directly with their readers. When Stacy told me she'd decided to publish THE SWEET SPOT on her own, I couldn't wait to hear about how her thinking about self publication had evolved over the years.  I'm so excited to bring you Stacy Barnett Mozer's, THE SWEET SPOT!

Quick summary of THE SWEET SPOT:

When thirteen-year-old Sam Barrette’s baseball coach tells her that her attitude is holding her back, she wants to hit him in the head with a line drive. Why shouldn’t she have an attitude? As the only girl playing in the 13U league, she’s had to listen to boys and people in the stands screaming things like “Go play softball,” all season, just because she’s a girl. Her coach barely lets her play, even though she’s one of the best hitters on the team.

All stakes now rest on Sam’s performance at baseball training camp. But the moment she arrives, miscommunication sets the week up for potential disaster. Placed at the bottom with the weaker players, she will have to work her way up to A league, not just to show Coach that she can be the best team player possible, but to prove to herself that she can hold a bat with the All-Star boys.

1. What has the journey been for THE SWEET SPOT? When did you write it? Did you query it with agents or editors? What was the reaction to the book from traditional publishing channels?

The Sweet Spot has been on a pretty long journey. It started as a completely different story about a girl who went camping and in one scene played baseball. That one scene was what people who read the manuscript liked best about the novel so in 2011, I rewrote the entire book to turn it into the initial draft of the story it is now. That version of the book got me into Rutgers One on One and got me an agent, which was very exciting. After some work with my agent, the book went out on two rounds of submission in 2012. It didn’t sell. So I put it aside for a while and worked on other things. I didn’t completely let it go though and focused my energy on this blog along with my new projects.

Then last year I decided to turn the manuscript into a paperback copy (not published, just for myself). I wanted the students I taught and students in my daughter’s class to be able to read it before they were too old for middle grade. As I was working on producing it, I deciding to make a number of big changes, things that the editor feedback might have implied needed fixing but that I didn’t recognize at the time they rejected it. I changed the entire manuscript from past tense to present tense, reanimated my main character’s dead mother and made her a living, but distant, presence in her life, and worked on a few other things.

2. Was your decision to self-pub a result of the manuscript's journey or was there a shift in your thinking about self-publishing?  If it was a shift in thinking and strategy, was there a catalyst?

At that point, once the book was revised, I had some big decisions to make. Did I convince my agent to send it back out there? Did I wait until a different manuscript I was working on got a book deal and then send it back out there? Or did I do something completely different and publish it myself. It was a decision I’d been grappling with for over a year. I took the first step over the winter by leaving my agent so that I could make these decisions on my own. I was leaning closer and closer to self-publishing, but still couldn’t get myself to push the button.

The final turning point happened when I attended NESCBWI 15. At the conference I heard from friends and experts on both sides. Self-publishing was discussed as a real alternative to traditional publishing, not just as the only option for a book that didn’t sell. Many authors I met were hybrid published (some books traditional, some self). I weighed the pros and cons. I decided that 1) This is the best book I have written. 2) It fills a need in the market because there has not been a book published about a girl playing baseball since around 2010. 3) Mo’ne Davis has put girl’s baseball on the front cover of Sports Illustrated for Kids now, not years from now. And most important, I felt that I could do it. I could be the champion of this book and get kids reading it. I’d already started doing that in my own school and my daughter’s school. I wanted the chance to do that outside my circle as well. I don’t know if I will ever feel that way about another book I have written, but this one I felt I could do myself and have fun doing it. And honestly, it has been incredibly exciting.

3. Traditional publishing affords a writer editorial support, art direction, distribution, ISBN numbers, marketing (a little). What have you taken on yourself and what have you hired out in order to self-publish? 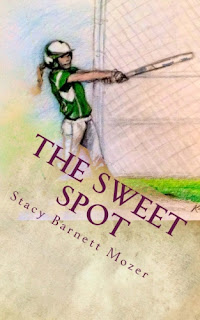 Other than the cover illustration, which was created by Karen Jacobson, I have done everything else myself … or I should say I’ve gotten by with a little help from my friends. The book has been through the editing paces with an agent, beta readers, and many critique group members. Children who love to point out when their teacher or former teacher has made a mistake have read it. Editing help is the only other thing I would have spent money on if that had not been the case. Other than that, I designed postcards myself and bought them at Vistaprint to keep costs down. I’ve bought a number of copies of advanced reader copies of the book for marketing and to check for errors. If the book starts making money (which is very hard to have it do) I may invest some of that money on additional marketing, but right now I am going to wait and see what happens.

4. With the launch of your book right around the corner, June 11th, about what are you most excited and where can people find THE SWEET SPOT?

I am doing a big virtual launch party for the book on Thursday from 7:30 – 10:30 ET. There will be prizes and all sorts of fun things going on for all age groups. Two of my students even made me a book trailer that I am hoping to premier. It’s very cute. You can join the party by clicking on the image below or putting the following URL in your browsers.  https://www.facebook.com/events/1637223889832642, and at http://fromwritertoauthor.blogspot.com. 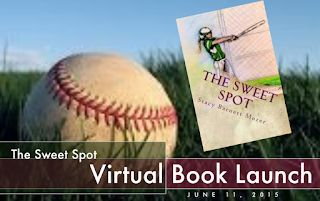 The paperback version of The Sweet Spot will be on Amazon starting on launch day, June 11th. The Kindle version can be pre-ordered now at http://www.amazon.com/The-Sweet-Spot-Stacy-Mozer-ebook/dp/B00XBED5JU. It will also be available in the Greenwich Library system, Elm Street Books in New Canaan, CT, and at the Cooperstown Book Nook in Cooperstown, NY. And I am continuing to working on expanding its distribution.

5. Is there anything you'd like to tell us about THE SWEET SPOT that I forgot to ask?

I am having a giveaway for the book along with my launch. You can enter below:
a Rafflecopter giveaway

You can find more about my books and me at http://www.stacymozer.com. I'm also on Twitter. Thank you so much for the interview!