Hi, Sara! We’re thrilled to have you here at Sporty Girl Books to celebrate the release of IGNITE, the second book in the DEFY series (released from Scholastic). At Sporty Girl Books we celebrate girls standing up for themselves and playing sports they love. While the Defy series is fantasy, and not a book we typically spotlight, I was thrilled when you said you would be on the blog, because if Alexa isn’t a kick a** sporty girl, I don’t know who is. I reviewed DEFY last January after devouring it in five hours. (You can read my review here). It was such a fun, fast-paced, twisting read that I can’t wait to read Ignite. I’m so glad you enjoyed DEFY so much – and I certainly hope you will enjoy IGNITE as well! 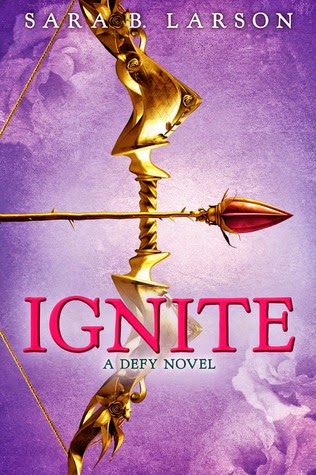 From Goodreads: Spoilera Alert. If you haven't read DEFY, this gives a few things away:
Thanks, Sara! It was so fun to have you here.

Murder, abductions, and forbidden romance abound in this thrilling sequel to Sara B. Larson's acclaimed YA debut, DEFY.Alexa remains by the newly crowned King Damian’s side as his guard, ever committed to helping him rebuild Antion and reclaim the hope of Antion's people, despite continuing to harbor a secret love for him. However, when another threat to Damian and his kingdom emerges, and blame is cast on their newly forged allies from Blevon, Alexa knows things are not what they seem. With the fate of her nation hanging in the balance once again, will Alexa be able to protect her king and uncover the true enemy -- before it's too late?

In her childhood, it was dangerous to be a girl. Could you tell us a bit about what she ran from and why she pretended to be a boy? In Alexa’s world, orphans were used to build the kings armies. Boys were forced into the armies and the girls had an even worse fate. Her twin brother convinced her to cut off her hair and pretend they were twin boys to avoid what orphan girls had to suffer.

I definitely wouldn't want to be a girl in her kingdom! Alexa excels as a warrior, she’s gifted enough to be the first of the prince’s guards. Did you take fencing lessons to learn how to write the Deny series? No, I didn’t – though I would love to! I’ve read so many books with sword fighting and watched so many movies, I would just picture the fight scenes as if they were a movie and then try to describe them. My agent is a ninja—literally, a black belt ninja—and has done sword fighting training, so I asked him if I’d got it all correct and he said I had!

Wow, I'm impressed, both in your writing and your agent's black belt. Can you tell us about where Alexa draws her strength from? I think Alexa is a very strong-willed and stubborn person, so much of her strength stems from that. But she also draws strength from her desire to protect those she loves. Losing her parents was a terrible blow, especially her father who she’d had a special bond with and who had believed in her with all his heart. Because of that she doesn’t always love easily, but when she does, she loves fiercely and would do anything to keep those people safe from harm.

If I remember right, you’re a runner. Do you run for the love of it, or for the workout, or both? I’m running again since i’ve had my baby and not yet back to the love of running, but I hope to get there soon! Do you play other sports, as well? Some of both, which I think is how it always is, right? Running is definitely a love/hate relationship. Most runs are hard. Especially because I have a bad knee that keeps acting up and not letting me add distance to my runs. But the times when you hit that elusive “runner’s high” – ahhhh, that’s what it’s all about. That makes it all worth it. I also take classes at my gym and do lots of weight training. I’m not great at any sports, but I do play most of them adequately. I used to swim and dive competitively as a teenager, and I loved playing basketball, soccer, and football with my guy friends growing up, before they got too big and wouldn’t let me anymore.

Yes, that elusive "runner's high." I'm running towards that, for sure. I have to be careful with one of my knees, as well. Could you tell us about your road to publication? It was long and hard! I queried for about 2 and a half years before I got my first agent. I was with her for two years and on sub three times, before we eventually parted ways. She was a lovely person, but just not the best fit professionally for me. I then queried for 9 months with two projects and while I got very close to getting another agent multiple times, it didn’t quite work out. But that’s when I wrote DEFY. And with DEFY everything was different. I had my first offer from an agent within two days, and I accepted Josh Adam’s offer a week later. We went out on submission right after that, and within a month, we’d accepted Scholastic’s offer!

I'm glad you kept pushing forward and believing in yourself. DEFY is a book I'm glad the world has, and I'm confident I'll feel the same about IGNITE. Have you always written fantasy? Are all your characters “sporty girls”? I usually lean towards having at least some magic in my stories, but not always. I do have a few books I’ve written in different genres. Not all of my female characters are super “sporty” but I’d say most of them are athletic, tough, and all of them can hold her own when it comes down to it.

What are you reading right now? MARK OF THE THIEF by Jennifer Nielsen – her awesome new MG that is coming out next month! I love her characters, they are always so great!

*Jealous* I want to read MARK OF THE THIEF. I'm on a MG reading kid right now. Do you have a favorite sporty girl read? Oh it’s always so hard to pick just one! How about a few recent faves? NIL UNLOCKED is the sequel to NIL and I really love Skye – she’s about the toughest, sporty girl you’ll meet—her dad’s made sure of it! In THIS SHATTERED WORLD Lee is also tough, but she has to be, as the commander over all those soldiers on such a difficult planet. Loved her, too! And finally GRAVE MERCY series: Assassin Nuns. Nothing else need be said.

I recently read the entire GRAVE MERCY series for the first time. Yes, absolutely brilliant books. I'll have to add THIS SHATTERER WORLD to my TBR PILE Is there anything else you’d like to share? Thank you so much for having me today!

Sara B. Larson is the author of the acclaimed YA Fantasy DEFY that released from Scholastic in January 2014, and the sequel IGNITE (December 30th, 2014). She can’t remember a time when she didn’t write books—although she now uses a computer instead of a Little Mermaid notebook. Sara lives in Utah with her husband and their three children. She writes during naptime and the quiet hours when most people are sleeping. Her husband claims she should have a degree in “the art of multitasking.” When she’s not mothering or writing, you can often find her at the gym repenting of her sugar addiction. She is represented by Josh Adams of Adams Literary.

I'm lucky to be interviewing two authors today. You can check out my interview with Dianne K. Salerni on the 2nd book in her incredible MG series, The Eighth Day, here.
Posted by Robin at 4:00 AM