I’m happy to review PODIUM FINISH by Beth Pond this month. The author contacted us at Sporty Girl Books and the publisher (Astraea Press) sent us an e-ARC. 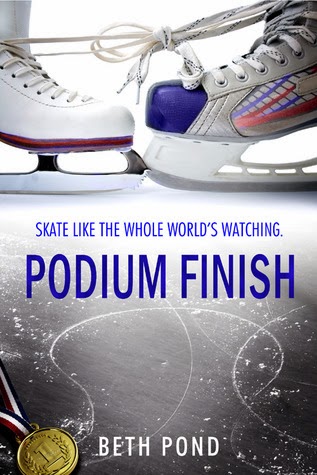 With six months until the Olympic Games, seventeen-year-old Harper's life is pretty much perfect. She's fighting for the starting spot on Team USA Women's Hockey, and for the first time ever, she has a crush on a guy who likes her back. She feels like the luckiest girl in the world, until she runs a risky play at practice and breaks her knee, thereby sentencing herself to six weeks in a cast and possibly ending her Olympic dream before it even starts.

For seventeen-year-old Alex, being anything less than the best is unacceptable. That's why, after a miserable debut season at the senior level, the former junior national singles champion switches to ice dance. Her skating partner, Ace, is an "all skating all the time" type of guy, which would be fine, if he'd stop keeping secrets about the real reason he and his former partner broke up. Now is not the time for second thoughts, but how can Alex skate her best if she can’t trust her partner…or herself?

As the pressure to make the Olympic team builds, the girls must rely on each other, because if there’s one thing they both know, it's that the only thing harder than skating to the top is staying there.

This was a great book for me to read, as it’s a great comp for my own YA contemporary. Told in alternating points of view, PODIUM FINISH follows two roommates at the Colorado Olympic Training Camp. Harper is a women’s hockey player, and Alex is an ice dancer. They are both working to make the US Olympic Team.

There’s a romance subplot with Harper and a speed skater, Rye. I wish there had been a little more of the romance, I loved Rye and wanted more of him! And I was waiting for romance to develop between Alex and her partner, Ace. There was some great romantic tension that felt unrealized to me!

The two individual stories are well told—the author has a great handle on both sports and really shows how hard the girls work to achieve their dreams. They both struggle a bit with communicating their emotions and the both have issues with their parents. They both have doubts and challenges to overcome in their separate sports. I love the allusion to superstition.

While both stories are really well-written, I would have loved to see more connection between the girls’ journeys – to see some joint stakes. But that’s really my only criticism; this is a great book for anyone who loves the Olympics, or who loves ice hockey or ice dancing.

It’s a great example of a sporty girl book.

Beth Pond's blog
Posted by Kristine Asselin at 7:00 AM