I met Mette Ivie Harrison (The Princess and the Hound and Mira, Mirror) at my first writing conference (WIFYR) back in 2010. She was an energetic presenter. I specifically remember her showing pictures of her house and explaining that the perfect way to make more time to write was to close your children's doors (see no mess, there is no mess) :)

This June Mette published the book IRONMOM about her journey and that of her family into a training and competing family.

Seventeen-year-old Sage is Mette's oldest daughter. She's been smitten by the running bug and was kind enough to let me spotlight her today. 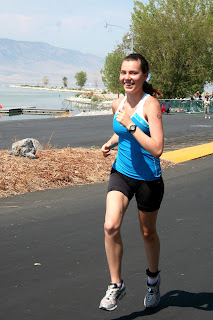 Sage, thanks so much for being here. I read in your mom's book about the summer project to run every day in an effort to make that mile run in school less painful. What was your take on that summer?

I really enjoyed that summer because it gave me a chance to show off because compared to the other kids in the family, I was the best runner. In elementary school, I was usually a terrible runner, but being in a situation where I was good at running made it a lot more enjoyable.


Half-marathons are definitely a more enjoyable distance, even though marathons are cooler and that makes them more fun. But they're so hard.

3. A marathon is so long (26.2 miles). Do you have any encouragement for other teens who'd like to compete in one, but are afraid of the distance?

Step 1: start.
Step 2: keep going.
(This is my dad's way of dividing everything into two simple steps).
Having a training plan gives you direction in your training. It takes a long time to train for a marathon and having a day by day plan of what to do each day makes it seem less impossible. To deal with pain I recommend caffeine.

4. Do you have a mantra you use when running? (In high school I ran cross country and my mantra was "my feet feel good, I feel good")

"This is all you, you've earned this."

5. What's your all-time favorite read and also a fav. sporty read (if you have one)

I love The Name of the Wind by Patrick Rothfuss. My mom's book The Monster In Me is about a girl that runs and is good. I haven't read a lot of sporty books because I tend to think I like to do running more than I like to read about it.

Thanks, Sage! I know what you mean. For me I read everything, but I'd much rather DO a sport than watch someone else do it:)

I couldn't miss the opportunity to ask Mette a few questions as well.

1. Can you tell us about your favorite race and why you crave/compete in Ironmans? 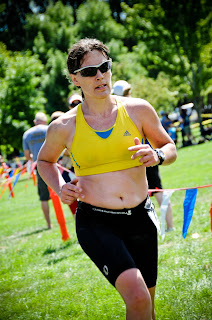 My favorite race is probably the Olympic distance tri (1 mile swim, 25 mile bike, 10k run) because it's not so painful that you spend weeks recovering from it, but it's long enough that it requires real mental effort to focus. I also have a fond spot in my heart for the OV50 that our local running store, Striders, puts on every year. It's a crazy, tiny race with a cap of 30 people, and it's 50 miles of almost all hills, up Trapper's Loop to Snowbasin and then down and around Pineview Reservoir and then back up and down to the finish. It's cruel and just requires such grit, but it also gives you enough time that you can just walk it if you need to. It takes the whole day and I'm in pain for days afterward, but the people who put it on make it fun.

Ironman is a different beast. There's not just one challenge, but one challenge after another. The swim start is scary even for swimmers because that's 2500 people in the water all at the same time, all trying to swim the fewest yards possible at the same time. And the water is so cold! At least the races I have done. Then when you're finally out of the water, you have to figure out how to get out of a wetsuit and onto your bike. Then once the bike starts, you have to think about getting in nutrition and not drafting and there's a new hill every time you think you've got a chance to take a breath. And just when you think you can't stand another minute on the bike, you get to start running a marathon. I love how hard it is, how you can never take a break. And I love that you get to see all these other crazy-tough people out there with you. And the volunteers are just amazing! They chase you down to give you the nutrition you need because you can't stop and wait for it!

2. What advise could you give me and our blog readers to get started? (I haven't run competitively since high school, but have determined that I'm going to compete again. My goal is a 5K this fall and a sprint triathlon next spring.)

The first time you race, it's probably a good idea to keep your goals minimal, just finishing or something like that. You want to make sure it's fun and something you want to repeat. And one of the weird things that happens in a race is that your sense of how fast you are going gets screwed up and even if you are trying to take it easy, you can sometimes head out too fast and end up walking at the end. So let that be OK. A 5k is a good distance to begin with and you can easily train for that just a few days a week. I recommend taking one day a week to run longer than the race distance to build up aerobic capacity and then one day where you do sprints, whatever sprinting is for you. Don't do the same distance everyday at the same pace. Your body adapts to that and then it isn't improving.

A triathlon is different because you've got all three disciplines to work toward. If you've never done swimming before, you may need to find a coach or a club where you can get tips from more experienced people. You can end up really sapping your energy if you don't swim with proper technique. I'd recommend a pool swim triathlon, because that's a little less scary for a beginner than an open water swim, and also you don't have to worry about the wetsuit. It's really tricky with a triathlon to leave enough energy for all disciplines, so go slower than you think you need to and speed up only the last 5-10 minutes if you've got fuel left in the tank.

Also, be aware that transition from one sport to another is usually very difficult at first. Your legs will feel funny moving from the bike to the run and sometimes from the swim to the bike. The first triathlon I did, I fell over. Twice. When I tried to stand up out of the water, I just felt dizzy and sick. That's pretty normal. So don't try to run like I did. Just walk it. If you are ending with a pool swim, keep it slow in the water and make sure you've got enough energy. You can even backstroke or breaststroke if you need more air and feel panicked. I still do that occasionally if I get panicky and feel like I'm going to die.

Thank you Mette, I'm taking notes. So far as I've training in the water I've felt that panic and had to calm down and remind myself I'm not going to die. I'm going for nice and easy on the racing as I get my feet wet.

3. What's your all-time favorite read (and a favorite sporty read if you have one)?

Staying Fat for Sarah Byrnes by Chris Crutcher is a great young adult book about two really close friends on a swim team (and the rest of the team, and other friends). Chris Crutcher always writes such amazing books. He also has a book called Ironman that's about a teenager competing in a triathlon. He seems to understand teenagers who are down and out so well. Partly his career, and partly just his huge heart. I also love fantasy and have a huge admiration and love for The Thief by Megan Whalen Turner.

I picked up Staying Fat for Sarah Byrnes based on your recommendation. Loving it so far! Thank you for being on our blog.

Nationally published YA fiction author Mette Ivie Harrison (The Princess and the Hound and Mira, Mirror) has been involved in triathlon since 2004, when she won 1st place in her age group at the first triathlon she ever entered. Since 2006, when she finished her first Ironman in 13:02 at Coeur d’Alene, Idaho, she has competed in 3 other Ironman competitions, 6 ultramarathons, the longest single day bike race in the United States (LOTOJA), and dozens of Olympic and sprint distance races. She is currently nationally ranked by the USAT for her age group and if she doesn’t bring home a medal, her children usually know it’s because she had a bike crash or was running a fever. Her husband has caught the Ironman bug and has competed in 2 Ironmans with her. Her four oldest children (ages 13-19) have all competed in either sprint or Olympic distance triathlons or half marathons. She trains them, as well as other family members and friends, writing training plans and talking them through the hard times.
Posted by Robin at 5:00 AM